Will Carroll Chats With DRaysBay About BBWAA, Pitching Mechanics, B.J. Upton and More

Share All sharing options for: Will Carroll Chats With DRaysBay About BBWAA, Pitching Mechanics, B.J. Upton and More

It what is becoming an annual or semi-annual event around here, I bring you another chat with Baseball Prospectus' Will Carroll. As many of you already know, Will is the author of the popular "Under the Knife" series for BP and is widely regarded as the injury expert in sports. He has also authored two books: Saving the Pitcher and The Juice: The Real Story of Baseball's Drug Problems. In 2008, Carroll amongst others broke the glass ceiling of the BBWAA and became one of the few internet-only writers accepted into the association. In this interview, I catch up with Will on pitching mechanics, what the inclusion into the BBWAA means for him, as well as questions about the health of B.J. Upton, Matt Garza and others.

TR: How did you end up considered the injury expert?

WC:I don't know. I think some of it is dumb luck, some of it in the way I promoted myself, and some of it because people just assume things. I just happened to be lucky enough to find a niche and do it well enough that people read it. I owe my career to Peter Gammons and Rob Neyer, who didn't have to talk about UTK back when it was an email going to a couple hundred people and I've always tried to repay that favor. I'm a reporter, not a doctor, not an ATC, and certainly not a physical therapist. I'm a translator more than anything. I talk to doctors, Trainers, and players in some cases, then try to make that understandable and usable.

TR: What about the pitching mechanics? You've been pretty critical of some people who've established themselves as "experts" when you were one of the first doing it.

WC:I have and I see where that seems a bit hypocritical. Thing is, I was doing the same sort of "translating" thing. I talked to a lot of people in writing "Saving The Pitcher" and I just kept bringing that forward. I wasn't an expert and still am not one, but when Tim Marchman came to me with the idea, I wanted to do the best I could and I'm proud of the book. I wish I could update it because some of it I cringe and some of it is simply outdated now. The problem I have is that I didn't know how much I didn't know. I'm like Tom House in the way that I'm not afraid to throw things out when the facts change. I'm as guilty as anyone of thinking Mark Prior was perfect, but it taught me that until we have cold, hard facts, we're really just guessing. There are things that help us play the percentages, but unless I have joint loads, I'm not sure about anything. It's a bit cliche, but the more I've learned, the less I realize I know.

TR: Does the BBWAA card change you?

WC:Not in the least. At least, that's what I think. I think the only change that people will see is that I'll be at more games. That might cost me a UTK here and there, but I also think I'll have a chance to talk to more people inside the game, especially players, to help understand what they're going through with injuries and rehab.

TR: Carl Crawford has complained about sore knees and cranky hamstrings  for the past few seasons. At age 27 and speed being his biggest  asset, how concerned should we be with CC having these problems?

WC:I'm not terribly worried about the knees. There's no evidence that there's a real problem there or that the Trop is something like the Big O. I'm sure it's something they're monitoring, but even if there is something, Crawford's not a one dimensional player. If he couldn't run, he could still be useful and think he could adjust to be more powerful if he had to. I always say "imagine him at DH" and if he doesn't kill you, you don't really need to worry about his legs.

TR: Much has been made of B.J. Upton's power loss due to his torn labrum. Do you think Upton will regain his 2007 power where he was a  + .200 ISO hitter? And why did he suddently get a power surge in October?

WC:That's the part that confuses me. If you say his power was down because of the shoulder, then how do you explain October? I honestly think it might be effort. Remember the talk that Triple-A bored him and the times he doesn't go all out? I think he's so talented that sometimes he just coasts. I think it's possible he saw the big stage of the playoffs and turned it on. I do think having the surgery will keep him from worrying so much. The better explanation for me is that he was hurting all year and 'held back' to keep it in check, then knew it was all or nothing in the playoffs and was back to being himself.

TR: Matt Garza has popped up on many "injury risk" lists including the Verducci effect. How worried should we be about his health in 2009  given his radial nerve injury and innings increase in 2008? Do you know anything about the super tendons he has in his elbow?

WC:I think we should be worried, but not panicked. The neuritis went away, so there's no reason to think that will pop up. The UCL is an interesting story - he evidently had a childhood injury that left some scar there. It wasn't a tear, just one of those quirky things that no one had ever really asked about. The teams knew - I remember hearing from a Twins scout who explained to me that they'd done a lot of due diligence on that before taking him.

TR: Another pitcher with innings questions is David Price. There is a lot talk about starting Price in Durham for continued development, but also to effectively limit his pitch/inning count. Do you  agree with this course of action?

WC:It's the Longoria plan combined with the Joba rules. I don't hate it, but I don't like what it says about the game. I'm much more into the idea of protecting him. I do think he's got to get a third pitch and even more than with Chamberlain, I'm not off the idea that he could end up a closer. It's funny because with Chamberlain, I think he's a better RP than SP, but think he'll end up as an SP. By that I mean that as an RP, he's probably one of the best in the game, right now. He would be dominant, would take over the closer role eventually, and is probably as good as Papelbon. As an SP, he's going to be good, a solid #3, but never dominant. I'm not sure which is more valuable honestly.

TR: Given his numerous past injuries and perceived his lack of conditioning, can the Rays really count on 50+ effective innings  from Troy Percival  in 2009?

WC:50? Sure. I think they see some value in him as role model and if there's anything they can get from Isringhausen, they combine into a reasonable player. I think Madden is smart enough to mix and match with the four or five options he has down there without turning into Tony La Russa.

TR: Any concerns about Jason Bartlett? After all, he is coming off a season in which he had multiple knee injuries, saw a drop in range and is creeping towards age 30. Do you see Reid Brignac taking over the SS position any time soon? 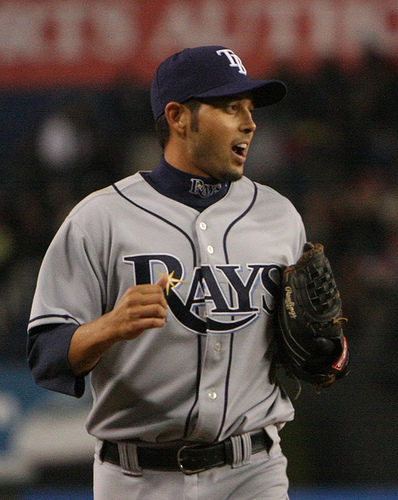 WC:It's going to take a complete breakdown of MVP to move him that quickly. I know the Rays value defense and not sure what the loss would be defensively with Brignac. I know that Shields and Kazmir talk about looking back there and "knowing" that Bartlett is a vacuum, but I think that's much more a confidence thing that something that John Dewan would measure. The interesting thing here is that you have to separate the two things that make up the game - the numbers and the person. Yes, it's the person generating the numbers, but you can really think about it as two different things. If a guy is great in the clubhouse, everyone has confidence in him, all the intangibles, you can give up a bit on the numbers. If a guy has great numbers, you can give up a little on the intangibles, up to a point (which I will call the Jerry Jones Demarcation.) Balancing that is one of the things you don't get in Fantasy and certainly not on Wall Street