Share All sharing options for: The Bullpen Battle: Joe Nelson vs. Lance Cormier

Recently, there has a been a few discussions around here about who should get the final bullpen spot. The most common names brought up are Jason Isringhausen, Joe Nelson and Lance Cormier. I covered Isringhausen before and I still think the Rays will opt to give him more work before making a decision. Whether that work comes in extended spring training or in Durham, I don't know, but I don't see him making the opening day roster as it stands. That leaves us with Joe Nelson and Lance Cormier.

Personally, I don't see a non-injury scenario right now where Nelson doesn't make the team, but many people will point to these numbers and say Cormier has been better than Nelson this spring therefore he should get a spot.

Nelson has had an ugly spring, but it's only 4.2 innings of work. I feel that some are losing sight of the fact that  he was an above average pitcher in 2008 and had better numbers than Cormier.

Nelson went 3-1 with a 2.00 ERA for the Marlins in 2008. His ERA was wonderful, however, his 3.45 FIP suggests that while he was good, he wasn't a 2.00 ERA good and that's ok. A 3.45 FIP would've been the third best in the Rays bullpen behind Grant Balfour and J.P. Howell. Nelson also had a 10.0 K/9 and a SwStr% of 11.6, both very good for a reliever. As Erik pointed out earlier, he is a fly ball pitcher and does give up a few home runs, but it's nothing out of the ordinary. If you are looking for a regression, according to his BABIP of .286 in 2008 compared to his career .302, there is room for a little regression, but nothing like the hit Dan Wheeler might take.

It's no secret, I loved the Cormier move as a low risk/potential reward signing. Originally, I saw Cormier as a replacement for Chad Bradford and when Bradford had surgery, I figured it was a perfect match. But then the Rays signed Brian Shouse and Jason Isringhausen and now it seems like Cormier maybe on the outside looking in.

I liked Cormier for a few reasons. Bouncing from starter to reliever really hurt Cormier over the first few seasons of his career. Finally, in 2008, the Baltimore Orioles decided to use Cormier a reliever and things clicked for him. He is a ground ball pitcher, and the Rays defense and groundball pitchers were meant for each other. I couldn't really find a fluke in Cormier's season. His ERA of 4.02 was almost equal with his 4.04 FIP. His BABIP was within two points of his career average. His K/BB rate, while poor, was in line with his career totals and while his HR/9 was down more than half of his career number, you could say working as a below average starter inflated his numbers.

Any way you slice it, both relievers had good years and both landed major league deals with the Rays. However, when you put the numbers from 2008 side to side, Cormier had a nice season, but Nelson was better and that's why he got the bigger bucks. Nelson signed for $1.3 million dollars, while Cormier signed for almost half of that at $675 K. I know money shouldn't be a deciding factor, but it can't be ignored. 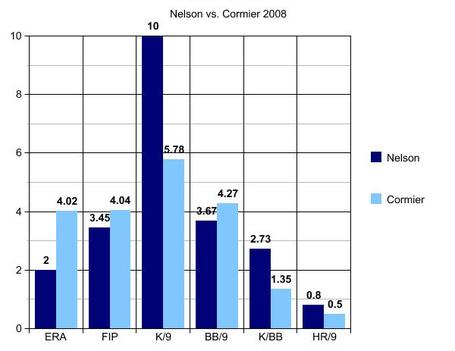 In a perfect world, I would love to have both in the Rays bullpen and maybe get rid of a higher paid, less effective, right handed reliever (there are a few, it doesn't matter which one.). A trade or injury could change the situation, but without one or the other, it's unlikely that both make it. Cormier has had a very nice spring, but all factors considered, there really is no question in my mind; Joe Nelson should and most likely will make the team