At some point, sports broadcasts will become more about the sport and less about animatronic baseballs and robots. Take the MLB Network's broadcasts of the World Baseball Classic and compare it to ESPN's. Same sport, but ESPN gets the games with higher assumed value - most of Team USA's games and the championship game. The MLB Network, with a production budget a shred of ESPN's, naturally is more enjoyable to watch and listen to. The personalities of the announcers shine through without becoming over saturating for the sake of it. The graphics are basic, the noises natural, and not an inch of drama is artificial, at least until Harold Reynolds is allowed near a microphone.

It's like the byproduct of increased production budgets are telecasts with less focus on the event and more focus on making the telecast into the event.  No longer is the aim for people to say "Oh wow, look at that catch," but instead, "Oh wow, that robot is dancing! Dance robot, dance!"

In many ways, the stolen base has become the MLB Network's broadcast. By now, every sportswriter has ranted about the death of small ball; or how stolen bases are about as rare as the dodo bird. That's an easy 500 words, throw in a few quotes about how Player X does the little things like stealing bases and boom, it's gold. 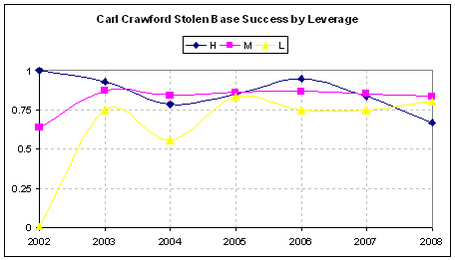 Crawford is getting the green light far more in low-leverage scenarios because, hey, they're low leverage. Either the Rays are blowing someone out, or they're getting blown out. Inversely, in high-leverage spots Crawford is being conservative and picking his spots. Makes sense right?

Well, here's the odd thing. As a team the Rays were actually below average in high-leverage stolen base success rate. League average was 73%, the Rays sat at 68%. They attempted 65 steals, a 73% is an additional three steals. This blew my mind. Of those 65 attempts, Carl attributed nine of them - 67%. Who else is running when it matters the most? My list went Crawford, B.J. Upton, and then Jason Bartlett. Upton attempted 24, succeed 16 times - 67% -- and Bartlett attempted 10, succeeding 8 times.

So, Crawford, Upton, and Bartlett combined for 43 of 65, that still leaves about 34% of the attempts laying elsewhere. That seemed odd, considering those three are amongst - if not the - best basestealers on the team. So I sifted through the rest of the roster looking for those 22 steal attempts, here's what I found:

By my count that's 36 steals by guys who should be attempting steals (Crawford, Upton, Haynes, Perez, Bartlett, Iwamura) out of 52. 69% and minimal change. Crawford had a down year in high-leverage situations, leaving that to explain some of the rather disappointing percentage, but Upton also sticks out; call him the anti-Crawford. The higher the leverage, the worse he did. 100% in low-leverage, 75% in medium-leverage, and 67% in high-leverage situations; consider he only ran four times in low, 32 in medium, and 24 in high. 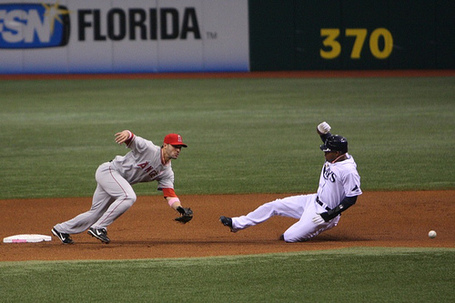 You can't mention stolen bases and not mention Rickey Henderson. Look at his career splits:

That is stupidly good. By comparison, Lou Brock's incomplete career data gives us percentages of 76/76/73 (H/M/L). Tim Raines (Sr.) beats Henderson though, with 84/83/90 - which raises a good question; how the hell is Raines not in the hall? I'll leave this one to Tom Tango and Jonah Keri; assuming Keri isn't too busy working on his Untitled Rays book. That's the real name by the way.*

Crawford' s career line is 85/84/73.  Historically speaking, when it counts he's about as good as Henderson and Raines and better than Brock. Upton is closer to Brock - 71/77/72, but still over the acceptable threshold. The point you're going to raise next is the sample size of each for Crawford. Using raw numbers is pointless. Raines and Henderson blow Crawford's attempts away, instead let's use high-leverage attempts per overall attempts. Meaning if a player has 5 HL steal attempts out of 10 total, we're talking a per-attempts rate of 2. Simple enough, right?

From that we get Crawford attempting a HL steal every ~4.16 steals, Henderson every 3.74 steals, and Raines every 3.09 steals. Raines' last major league game came in 2002 and Henderson's a year later. Amusingly, Crawford's first game was in 2002. This means that while Henderson and Raines both played through the era of homeruns, Crawford has never seen an alternative. Consider this: Crawford has been around since 2002. Since then the average amount of stolen base attempts in the American League is 0.79. For Henderson's first 11 years in the A.L. the average was 0.99.

Crawford is obviously not near the player Henderson was. BaseballProjection.com has historical Wins Above Replacement dating back to 1955. Henderson recorded 46.3 wins over his first seven seasons, Crawford is just shy of 20. Henderson ranks fourth since 1955 behind Barry Bonds, Willie Mays, and Hank Aaron, with any luck Crawford will join the top 300 list over the next few seasons - he's about eight wins shy of Bill Mazeroski.

What is clear is that Crawford is more than simply a good baserunner. Super speed aside, clearly there's an understanding of how pitchers think and execute at work here - that or an inordinate amount of lucky guesses. Asking Crawford to steal every time on is asking for trouble, and expecting more steals is expecting more failures as well. Yet, Crawford has had multiple streaks of consecutive games where he's snagged at least one.

During July 2007 Crawford did it in five straight.  He went seven for eight, and during those 21 at-bats Carl had a .522 on-base percentage and .571 slugging. He's done four games three times:

June 2005 - Amazing because we're talking about less than 20 plate appearances and an OBP under .250, yet he stole a base per game. Every time he reached he stole.

Crawford's done two and three games numerous times, but how about multiple steals per game? At least two steals in at least two consecutive games has been done five times:

Carl's steal of home in July 2006 was not part of a streak, but one of his bigger collections of thievery. He stole second, third, home, and even first if you count a catcher's interference call that let him on. If we're ranking Crawford moments, that has to be top three, next to his immediate post-ALCS game seven reaction - simplistic, raw, and brief; exactly what you would expect from someone like Carl. Next comes the steal of home, and then his homerun in the first game of the World Series*.

*When Mike Alstott scored the first touchdown in Buccaneer Super Bowl history, many people said it was only fitting. Crawford scoring the first run in Rays World Series history is more than fitting. If that event were a dress it would suffocate Mary Kate Olsen. 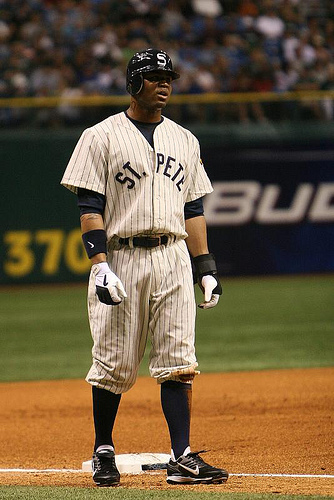 It makes you wonder how many more steals Carl would have collected over the years if he possessed Henderson's plate discipline. A career walk rate of 4.9% pales in comparison to Henderson's 16.7%. If both get 700 plate appearances during any given year, Crawford's reaching via walk a little less than 40 times, Henderson a little more than 115. Of course, Crawford's not getting an out in every at-bat he doesn't walk, but then again, he's not getting a hit either. Still, Carl's stolen base tendencies stack up about as well as you would expect.

Numbers are a lot like those television broadcasts; sometimes you need to turn the noise down to recognize the greatness.