In The Land of The Shortstop, Reid Brignac Stands Tall

Share All sharing options for: In The Land of The Shortstop, Reid Brignac Stands Tall

Note: The discrepancies between the Baseball Databank numbers and Baseball-Reference's numbers are larger than originally assumed. Take the following with a grain of salt, given I have no idea which is more accurate. It looks like B-Ref rounded the 6'2.5" players up to 6'3", where as my query did not, hence the confusion concerning a few heights mentioned.

Reid Brignac is fascinating to me. Perhaps I'm a sucker for a good story of redemption or maybe I just fall in love with guys who have something to prove to the masses, but Brignac has my eye. Everyone knows the story -- or will, watch for a FanGraphs post on him tomorrow -- about his offensive charge then offensive recession then sudden defensive explosion. Yet while checking the defensive numbers, it appears there was never a doubt he could play shortstop.

That's right, Brignac has always graded out as an average defender at his position at each step. Now you can debate the merit of TotalZone and such, but I have a theory on why we heard so much about a potential change in positions while Brignac was growing up.

You see, Brignac is 6'3" and plays shortstop. Those two things rarely mix. In the history of baseball, two players recorded at 6'3"* have played shortstop for at least 100 games during their career. You should be able to name one, the other is a bit more trivial, but still recent. Two hints:

One is baseball's "iron man" and the other is a coach for the Florida Marlins.

Cal Ripken Jr. and Andy Fox are the only two with at least 76 inches below them to last at shortstop for any amount of time. Here's the interesting thing though, the guys who are a touch below 6'3" (6.25 to be exact) are pretty impressive:

If I asked you to name your prototypical modern day shortstop, you would almost definitely name Jeter, Tulo, A-Rod, and Hanley. If I asked this a few years ago Crosby most likely would be a choice as well. That's at least two future hall of famers, two all-stars, and one flame out. How many of them were talked about moving off their positions while in the minors? How many of them would've played shortstop 15 years ago? 20?

The two players that Brignac most closely profiles in physique are Jeff Huson and Virgil Stallcup. Let's hope he's better than either. Huson** was a career journeyman with two useful seasons for Texas in the early 90's and a bunch of useless seasons for Milwaukee, Seattle, and the Chicago Cubs. During his career he played short, second, third, first, DH and all three outfield positions. Elliot Johnson has a hero, and his name is Jeff Huson.

I'm not saying Brignac is the next Cal Ripken Jr. or Jeff Huson***, but I am saying the reports of his dismal defensive in the low-minors may have been greatly overstated based purely on stature. Does that affect his current day status? Absolutely not. It fails to affect his future status either, although it does give us a nice piece of history if Brignac manages to play in 96 more games at short throughout his career.

Tall shortstops may have been pigeonholed to third in earlier years based on the expectation of weight gain. Brignac likely didn't fill out like you would've expected a tall 18-year-old to fill out, and  for that the expectations of where he can play have changed.

*The height measures are recorded in the Baseball Databank and rounded to the nearest inch. There are no 75.5 inch players, only 75 and 76. Is that incorrect? Probably, but there's no source with a centimeter by centimeter measure that's freely available. Plus, if the biggest issue here is with the amount of centimeters a guy stood, then I think we're good.

***Equally as coincidental; Huson played in the same game that Cal Ripken broke the consecutive games played streak. I'm pretty sure there are three categories where these two should be listed together: 1. Height, 2. Players of the last two decades, 3. Guys who played in that game.  Huson bleeds grit: 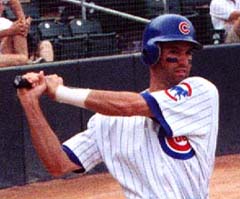