It's Okay, Gabe Kapler Is a Slow Starter

Share All sharing options for: It's Okay, Gabe Kapler Is a Slow Starter

Gabe Kapler has not had a good spring. Seriously, .128/.226/.208 is awful. For comparisons sake, Scott Kazmir is hitting .500/.500/.750 and has just as many extra base hits, one, as Kapler does. There have even been calls for Kapler's release in threads on this site where we know spring training stats are... for the most part... meaningless. Let this post serve as the rescue worker talking you off the Gabe Kapler ledge. It's going to be okay; history tells us that Gabe Kapler is going to hit the baseball.

First of all, people need to realize just what Gabe Kapler's role on this team is. He is a platoon player/fourth outfielder. He is here to hit left handed pitching and provide solid defense as one half of the "Gabe of the Day" platoon. He isn't a superstar and he won't become one here. During this spring, Kapler hasn't hit much of any kind of pitching, but he's probably been facing a share amount of right handed pitching, which isn't his specialty.

One trend I noticed is Kapler is a notorious slow starter. His .701 career OPS in April/March is by far the lowest OPS of any other month. In fact, Kapler does most of his damage in August and September where his OPS are .791 and .782, respectively. Maybe he is just clutch like that.

Is there a chance that Kapler has hit the wall at age 33? Sure, but given his physical condition and his worth ethic, it's unlikely that he has fallen off that dramatically and this quickly. More likely than not, what we're witnessing is just another slow start by Kapler, which has been a calling card for him over the course of his 10 major league seasons. 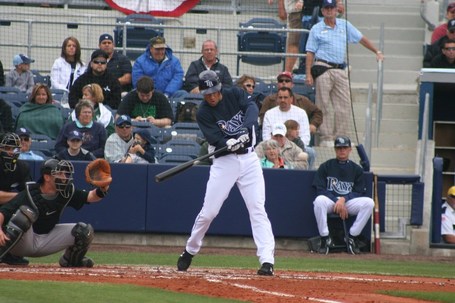