Evan Longoria Likely (Did Not) Have The Best Rookie Season By a Third Baseman. Ever.

Share All sharing options for: Evan Longoria Likely (Did Not) Have The Best Rookie Season By a Third Baseman. Ever. 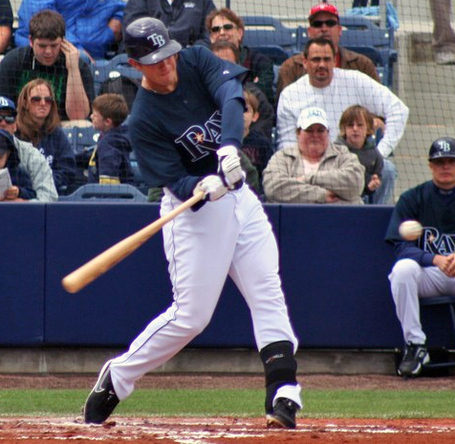 Did you know, Evan Longoria's season was the third best by a rookie third baseman who played at least 100 games in history? Well, it's true. The filtering statistic of choice is OPS+ since raw numbers would leave us with the offensive eras rather than the players who truly stood out from their peers.

The Milwaukee Brewers' Ryan Braun is the leader with an OPS+ of 153(!) and Cincinnati Red Grady Hatton (128 OPS) from 1946 are the top two. Braun is a contemporary, but now plays the outfield. Easily one of the better offensive players in the game, Braun saw quite the improvement moving to left field this season. Pretty close to average.

Meanwhile Hatton had an interesting career. His final season came as a 37-year-old with the Chicago Cubs in 1960. In between Hatton spent time with the White Sox, Red Sox, Orioles, and Cardinals, but never found a way to top his 23-year-old season. Hatton's career line isn't all too impressive by today's standards either: .254/.354/.374. For comparison, Akinori Iwamura's career line is .279/.353/.394. Alas, that is why context is important.

The rest of the non-Longoria top five features Jim Finigan (1954 Philadelphia Athletics, 120 OPS+), Art Devlin (1904 New York Giants, 120) and Eric Hinske (2002 Toronto Blue Jays, 119 OPS+). Finigan was 25-years-old during his rookie season with the Athletics, and while he was an All-Star the following season, he never posted an OPS+ above 95 again and was out of the league after turning 30. Devlin had a solid career during the early 1900's with the Giants.

Hinske, well you know him. Oh, and the other Rays connection is Iwamura's 2007 season, which ranks 15th.

Now I certainly was not around to see Hatton play - and I doubt many - if any - of you were, and while I don't want to take away from the highlight of his career, well...we all know Braun was quite poor defensively. We all also know that Evan was pretty damn fine with the leather. FanGraphs' UZR has Braun worth -25 runs(!!!!!!!!!!!!!!!!!!!!!!!!! in exclamation marks) and Longoria worth 15 runs. Even if those numbers are not exact, Braun only had about an 18-run advantage in offensive production. Was Evan at least 18 runs better defensively? The numbers certainly suggest it.

That means there's a realistic chance that Evan Longoria is the owner of the best rookie season by a third baseman in league history.

Edit: Or not. As RGlass brought up:

Baseball-reference did not offer a “rookie” qualifier, so this data may be a bit incomplete. These are players who’s first years were their rookie years, and any player who had a cup of coffee prior to his true rookie year is not in this discussion. If I wasn’t so lazy, I’d look to see second year guys that had better seasons and find out if they still qualified as rookies. So, in this context “rookie” means first-year player and not all players that were rookie eligible.

I missed that disclaimer, and also missed Dick Allen, as Rob Neyer notes. My apologies, and if nothing else, important life lesson learned: look into classifications better.