For the Tampa Bay Rays, Andy Sonnanstine is in control

Share All sharing options for: For the Tampa Bay Rays, Andy Sonnanstine is in control

Wade Davis's excellent performance this spring has many fans are already fantasizing about a rotation of Scott Kazmir, Matt Garza, James Shields, David Price and Davis. I'll admit, I to have visions of this rotation in the Rays future, but we seem to be pushing aside Andy Sonnanstine without thinking. To this point Sonnanstine has been very good for the Rays. Most people thought his max potential was a fifth starter type, and while that may still be true over the course of his career, his performance to date has been much better than that.

With an FIP of 3.91 in 2008, Sonnanstine had the second best FIP in the Rays rotation behind James Shields. He will start 2009 with a career FIP of 4.05. Just for comparisons sake, The Orioles, Nationals, Pirates and Tigers didn't feature one starter in 2008 with over 100 innings with a sub 4.05 FIP. If you believe in projection systems like CHONE and Marcel, Sonnanstine's 2009 won't be that far off his past performances. CHONE has him at a 4.13 FIP, while Marcel is a bit kinder with 3.96. Either way you look at it, that is a quality pitcher stashed in the back end of the rotation.

The obvious knock on Sonnanstine is that he's hittable. His career H/9 of 10.08 is not impressive, but what is impressive is his ability the keep runners off base via the walk. In 324 Major League innings Sonny has allowed just 63 walks. His old friend, Edwin Jackson, walked 77 hitters in 183.1 innings last year. Incase you were wondering, last year Sonnanstine also had a higher K/9 than Jackson, who is now busy "wowing" Jim Leyland with his electric stuff.

Thanks to our new found friend, Baseball-Reference's PI feature, I looked up some of the best K/BB ratios over the past 20 seasons for starting pitchers. Here were the full parameters.

Not only does Sonny make the list, but James Shields also checks in with the 3rd best K/BB rate for the parameters set. Now obviously, Sonnanstine isn't on the level of most of the names on the list, however, this just shows that his control is pretty special. In fact, some of the names below him include: CC Sabathia, Mike Mussina, Roy Halladay and the control artist himself, Mr. Greg Maddux.

This year will be an interesting one for Sonnanstine. Will he be able to repeat his 2008 performance and prove that maybe he really is more than a fourth or fifth starter? If he does, do the Rays trade him after the season?

Sonnanstine will be arbitration eligible for the first time after the season. He also figures to have top prospect Wade Davis breathing down his neck for part of, if not most of, the season. The smart money says if he does have a good year the Rays would be in a prime position to move him, improving any area of weakness they feel they have. This would allow the team to replace him with Davis, a cheaper and more talented player, while adding another piece to the puzzle. This is exactly what the Rays did this offseason with Edwin Jackson. Another scenario could see the Rays moving either Sonnanstine or Davis to the bullpen, which will have a few more openings in 2010 once contracts belonging Troy Percival, Brian Shouse, and Chad Bradford are up.

A lot of scenarios and questions, but as is the case most nights on the baseball diamond, Andy Sonnanstine is in control. 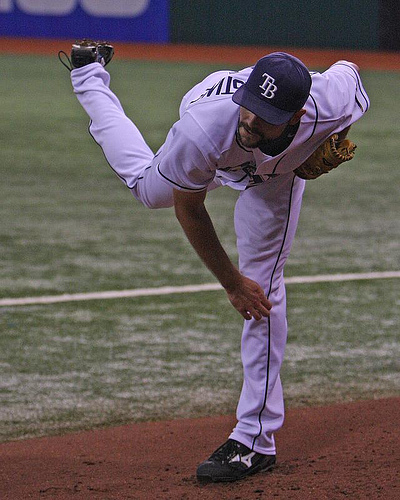