Just a few days ago, I wrote about  Jason Hammel and how had pitched six  scoreless innings and put himself at or near the top of the fifth starter competition. Of course he follows that up by going out there today and giving up four earned on four hits to the Pawtucket Boston Red Sox. It was Hammel's first "relief" appearance of the spring and he was tapped for home runs by George Kottaras and Jonathan Van Every. To be fair, while the box score looks ugly there was still some good to come out of the effort. 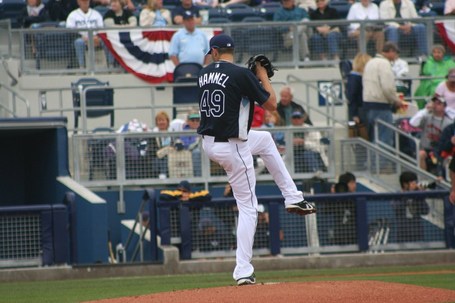 The biggest difference I've seen from Hammel this spring is his improved control. Coming into today's game he had five strikeouts and one walk. In today's contest he doubled his strikeout input with five more K's, but more importantly he did not walk one. He did hit two batters, but again they were Red Sox batters so you can't be mad at that. Now I know while a shiny K/BB ratio is nice the goal is still to not allow the other team to score. However, we don't know if Hammel went out there today and was working on something and didn't care about giving up the runs. After all that is what spring training is for. It will be interesting to see if Hammel can keep up the improved control in the next few weeks. If so, he could be on his way to getting the first start from the fifth slot.

The Rays also got a good performance today out of Lance Cormier. Earlier this off season I pegged Cormier as a potential cheaper alternative to Chad Bradford and was glad when the Rays gave him an opportunity. To this point he has had a solid yet unimpressive spring. However, today he showed some of the things that impressed me from his 2008 season. Cormier came into the game to relieve Jason Childers with the bases loaded and 1 out. He induced a groundball that could've been turned for two, but Ray Olmedo had trouble getting the ball out of his glove to turn the second out. Cormier then got the inning ending strikeout on what Dave Wills and Andy Freed both described as a nasty breaking ball. He got the final three out in the ninth and ended the day with 1.2 scoreless innings with two K's. Cormier is not a lock, but more performances like this could help him secure a spot in the Rays pen.

I  would also like to welcome the newest member of  the 2009 box score legends, Mr. Jon Weber. Weber led the Rays attack by going 2-2 with a home run and six RBI. Another interesting note,  the Rays scored 15 runs on only seven hits with only six of runs being earned. They were helped by SIX errors by Sox fielders.