Without the benefit of pitch f/x or radar gun readings, it's hard to get a feel for how Scott Kazmir looked in his spring debut. 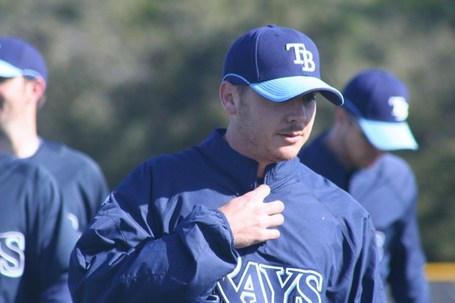 Kaz had a clean and efficient 1-2-3 first inning. He used just nine pitches to retire the side on a flyball, a ground out and a pop fly in foul territory. To start off the second inning, he got former teammate Delmon Young out on a deep fly ball to centerfield. He then gave up a single before striking out Mike Redmond swinging for the second out of the inning. He would give up another single to former Ray Brendan Harris before giving up an RBI double to David Winfree. He induced a groundball to end the threat and his debut. Kaz used nearly three times as many pitches in the second inning (24) than the first(9). He finished the day with 33 pitches thrown. Here is his final line:

Similar numbers to what James Shields did in his first appearance. When asked about how his first start went Kazmir gave us this famous spring training line:

"Seriously, that's the best my arm has ever felt.'  ~ Heater

The report goes on to mention that Kazmir threw all of his pitches and was getting swinging strikes with his changeup. If somebody went to the game and could give us a little more info, feel free to leave a comment.

Also making there 2009 debuts were a pair of relievers. Dan Wheeler pitched one inning and was not so sharp. Cardiac Dan gave up a run on two hits, a walk and a wild pitch. He struck out one batter. Joe Nelson made his Rays debut and wasn't much better. Nelson would give up two hits including a two run home run off the bat of Delmon Young in his only inning of work. He did not walk any and got all three outs via the groundball.

Another note of interest from today's game was Jeff Niemann. Niemann, who is locked in a battle with Jason Hammel for the fifth spot in the rotation made his first relief appearance of the spring. Coming into this week the competition was neck and neck, but after four more shutout innings today, Niemann seems to be ahead on points.

To be fair to Hammel, all of his runs came in his last appearance and his control remains stellar, however, if he struggles the next time out and Niemann continues to quietly dominate we could have a situation. It's no secret the Rays like Niemann as a reliever, but if the excellent numbers continue to pile up for him and Hammel slips once more it would be a hard sell to say Hammel "won" the competition. This one is shaping up to be quite the nice battle.