Bullpen Look: One Series Down (Part 1)

Share All sharing options for: Bullpen Look: One Series Down (Part 1)

One of the big questions going into the year was whether or not the bullpen could repeat its stellar performance of a year ago. Obviously the jury is still out in that regard, but it can't hurt to take a look to see how the bullpen performed in the first series of the year against one of the best teams in baseball in a tough pitching environment. As far as how the bullpen directly affected wins and losses, the bullpen has done a magnificent job. In the only loss of the series the Rays bullpen pitched an almost perfect 2 2/3 innings (the lone black mark being a walk by Lance Cormier), and all runs were the sole responsibility if James Shields.

As far as their actual performance, they have left a little to be desired. Here is the line so far by Rays relievers this year:

As you can see they have struggled with control (not much of a surprise) and the long-ball. The biggest culprit was Percival who struggled to keep men off base and keep the ball in the park (1 HR amd 1 BB in 1 IP), but he did close the game out and secure victory. This will be the test of the bullpen (and every bullpen): how they do in high leverage situations. So far they have rarely been tested in that regard, but when they have been they've passed.

Let's take a look at what they have done on an individual level.

We will start by taking a look at what each pitcher has thrown and how successful they've been. The following table shows each pitcher and what their repertoire has looked like so far.

*Nelson's changeup has yet to be put in play. There have been 1 swinging strike, 3 called strikes, 1 foul ball, and 5 balls.

RJ did a post showing the different looks batters will see when they face the two lefties in the bullpen, and I thought it might be interesting to take a look at the 5 righties and see how their releases compared. 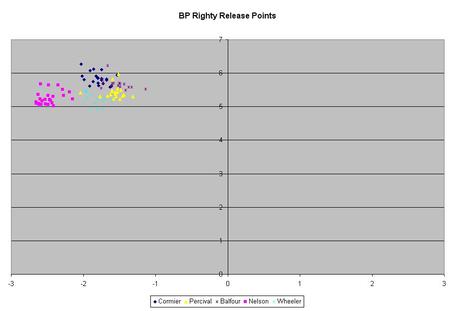 As you can see they are all pretty similar with Joe Nelson being the only one that stands out. I wonder if his different arm angle might help him going forward. Interestingly, this year's ROOGY (Cormier) doesn't have the same exaggerated release that our LOOGY does, and he doesn't come close to the under-slinging Bradford. He still manages to induce a lot of groundballs thanks to his cut fastball.