Share All sharing options for: Andy Sonnanstine Poor in 2009 Debut

Tonight's start was possibly the poorest I've seen from Andy Sonnanstine. It extends beyond the results - as it always does. His fastball was positively flat, as was his slider, so much so poor ol' Gameday doesn't really know what to call either: 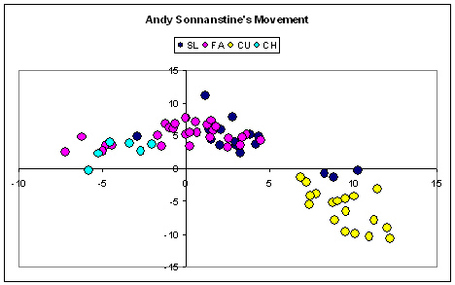 Whatever that cluster of pitchers around the y axis is, they didn't move much, if it all. Combine that with below average velocity and you have a problem. That's not going to fly in the majors or anywhere else, and especially not against a pretty good offense. His curveballs seem to have done decent for the most part and his new found change was - well - missing. Six of them thrown, two went for called strikes, three for balls, and a foul. Maybe the advanced change didn't come into play tonight, but I'm still wildly skeptical that there is an advanced change.

As for his control: 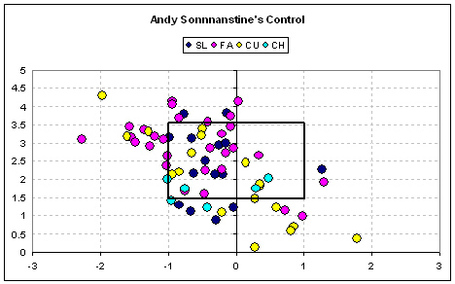 That's really not Andy Sonnanstine at all. He missed the zone quite a bit, and when he did find the zone, it was served on a plate to the hitters. Somehow, Sonny did get four swinging strikes, but even then you can chock it up to the hitters simply missing high fastballs/cutters.

Awful start tonight, Sonnanstine has New York next. Do better Andy, you have in the past, many times.