Share All sharing options for: Evan Longoria Homers Twice, But Rays Come Up Short Vs. Orioles

I hate to sound like the arrogant Tampa Bay Rays fan here, but the Rays could have easily won that game. Hat Tip to Mark Hendrickson and most of the Baltimore Orioles' bullpen, but the Tampa Bay blew multiple opportunities tonight. It was a strange night and it all started in the first inning.

We all know Nick Markakis has a good arm in right field, but how many times, if ever, do you see Carl Crawford thrown out at third trying to stretch a double into a triple? I've tried to come up with one and I can't. Of Course, instead of having a man on with one out, Evan Longoria came up to the plate with the bases empty and proceeded to deposit was is being classified as an 80 MPH two seam fastball over the wall in center field. I'll have more on Longoria later.

The Rays would lose the lead in the bottom of the inning as Andy Sonnanstine just didn't have it tonight. I'm not going to get into Andy's start much here since R.J. covered it enough.

Some how, some way, Mark Hendrickson would keep the Rays bats at bay with blazing mid 80s stuff for 5.1 innings. Most of his pitches would sit around the low to mid 80s with only a select few touching 88 or 89. I was waiting for the heavy right-handed Rays lineup to pounce on Hendrickson, but unfortunately that never happened. What gets me most, is Hendrickson didn't even have great separation on his pitches. Here is the breakdown according to Brooksbaseball.net

I don't know what the difference between fastball (FA) and two seam or four seam is, but Hendrickson worked off basically three pitches: four seam fastball, changeup and a curveball. If you look at the chart below the four seamer and the changeup are almost identical. 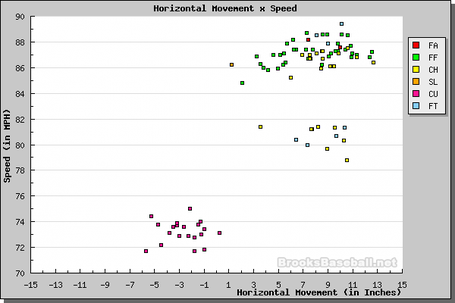 After a shaky first two innings, Sonny seemed to be setting down in the third and fourth innings. He faced just six batters in those innings and threw just 28 pitches. He would retire the first two batters in the fifth inning on eight pitches and seemed to have found his zone. However, a missed dive attempt by Carl Crawford would change that. On a play most left fielders don't get close to, Crawford dove and missed a ball hit by Adam Jones by inches. Obviously, Crawford is no Ben Zobrist out there. After the miss, Jones would be standing on second, but not for long as he was driven in by Nick Markakis in the next at-bat.

Much of the reason for the Rays defensive success has been defensive placement and some of the creative shifts used by Joe Maddon. However, on bizarro night, the shift would come back to haunt the Rays. Employing three infielders to the right side of the diamond, the Rays would have Longoria playing short stop with a slight lean towards second base, of course we all saw what happened, Aubrey Huff hits a ball to the spot a normal short stop would be and Longoria made a great effort, but was late on the throw. A single and a walk later, Andy's day would be done and the Rays would be down 5-1.

Former Ray, Danys Baez relieved Hendrickson and was pretty filthy striking out four of the five batters he faced. The Rays bats would remain quiet until Longoria connected with another home run. This one would see Longo turn on a 94 MPH inside fastball by Jim Johnson and sail over the left field wall for a two run shot. The Rays would add a solo HR by Dioner Navarro in the ninth, but failed to do anything after. But now back to Longoria. Longo homered for the third consecutive day and has four home runs in four games. He has also hit safely in all four contests. I know it's early, but you can't help but be a little giddy about the start he's having and the 1.222 slugging percentage he's carrying

Looking for some positives, Lance Cormier did another fantastic job; giving the Rays 2.1 innings of two hit shutout ball. Cormier has come in twice with the Rays trailing and had held the opposing lineup scoreless both times. J.P. Howell looked much better in his second appearance.

Some days it just happens this way. Like the opener in Boston, you have to look at the positive fact that even though the Rays played poorly, they were still able to remain in the game until the end.