After writing about the Rays first inning struggles this morning, I did not know the worst was yet to come. While the four starters before Jeff Niemann struggled in the first inning, none were quite as bad as Niemann was tonight: 4 H, 5 ER, BB, HBP, Grand Slam. And that was before the first out. Here is the full first inning of work:

25 pitches to all nine batters made for an awful 2009 debut for Niemann. Unlike some of the other struggles, Niemann seemed to have ok control, but maybe he was too "in the zone." The Orioles hitters were jumping on Niemann early in the count mostly because the offering he threw the most, a four seam fastball, was so flat and easily hittable. 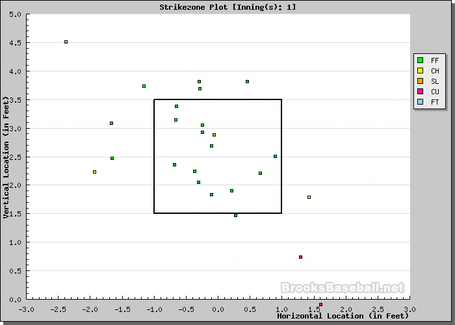 Luckily for the Rays, Niemann would rebound and eat up a few innings which saved Joe Maddon from having a bullpen nightmare. With all eyes on the fifth starter spot thanks to the "David Price decision," it was definitely not the start anybody wanted from Niemann.

This makes a full turn in the rotation filled with struggles and 20+ pitch innings. James Shields takes the mound tomorrow as the rotation rolls over. Let's all hope the second time around is a lot better than the first; especially in the first.