Speaking of bad starts, this one certainly qualifies for that. Niemann was ridiculously awful in the first inning, giving up a myriad of hits that lead to a Melvin Mora grandslam. Blame it on the cold, jitters, whatever; clearly Niemann was pestered by something right off the bat. So, let's look at what went wrong in the first.

Niemann's release point was inconsistent and really all over the place. For someone this tall, it's not surprising that he has issues repeating his delivery despite being advanced in age and experience. This is going to be one of those things that people point to when they say he's destined for relief work no matter the results over the next few starts. Niemann's fastball didn't move much either, even compared to his start last year; the average was less than 4 inches horizontal movement and less than 10 inches vertical movement. Combined with average velocity, that's not a good combination.

Oh, and about his control... 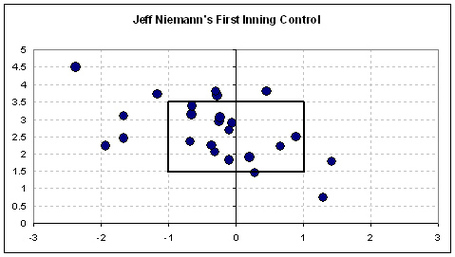 After the first inning, Niemann's fastball break got better, as did the diversification of pitches being thrown, and his control. His release points:

Oh, and when Niemann got tired, you could tell. Just look at his fastball velocity, last 10 release points, and last 10 pitches in movement.

Only one start, small sample size, and so on, but if this becomes the norm, Niemann's going to the bullpen is going to be less of "if" and more of "when".