Share All sharing options for: James Shields Bounces Back Against Baltimore; 7 Shutout Innings

Day and Night. No, it's not just a ridiculously catchy song by Kid Cudi. It also describes the difference between the two starts James Shields has made this young 2009 season. Shields lasted just 5.1 innings in Boston and gave up five hits on nine hits and three runs on 100 pitches. However, he was lights out this afternoon with seven shutout innings against the Orioles. Just for compare and contrast, here is how the first 5.1 innings of today's start look against Tuesday's.

That is more of the James Shields we are used to seeing. He was pounding the strikezone, limiting the walks and keeping a low pitch count. There was a lot of hoopla around Shields' road woes this week, but historically Camden Yards has been a favorable park to him and that was the case today.

For the first time all season the Rays staring pitcher retired the first inning side in order. Shields needed just 10 pitches to retire the Orioles is the first. This was exactly half of the previous low (20) by Matt Garza.

While Shields didn't strike out many (3), he used his excellent defense and got a fantastic number of ground ball outs (12). Looking at the data from start to start, it seems that Shields release point was a half inch to full inch lower on some pitches today, and all of his pitches were tighter and had sharper more downward action. Here are the side visuals for each starts. H/T to Brooksbaseball.net 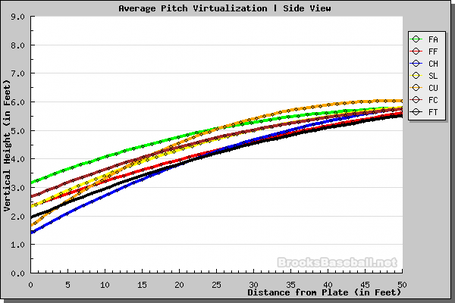 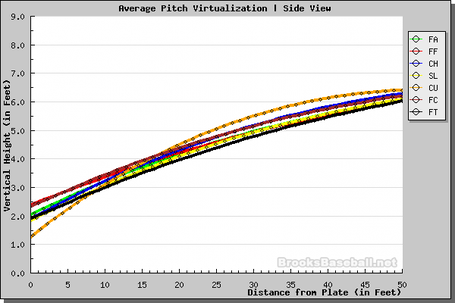 I also noticed that Shields took a little velocity off from his pitches in order for better command. He worked primarily off of a four seam fastball which lived around 91 MPH. He threw this pitch about 38% of the time, however, he used his changeup and curveball to start at-bats and get ahead of hitters. In fact, Shields started 16 of his 25 ABs with a strike. He also got three first pitch outs which is always nice.

As far as the rest of his pitch usage, following the four seamer was the patented Shields changeup. The change was used roughly 24% of the time today and primarily stayed around 82-83. The third offering of choice was a curveball which was thrown 13% of the time. Shields did mix in a few cutters and two seam fastballs which helped him get all those ground balls. Again, he did not get many strikeouts today, but was able to get a fair amount of swinging strikes(6) and struck out Aubrey Huff on a nasty swinging strikeout on a change-up in the dirt in the seventh inning.

Shields was lifted before the eight inning after 88 pitches and an 11-0 lead. Yes, it would've been nice for him to get a shutout, but Shields had done his job already. He held the other team scoreless and did a fantastic job of saving his bullpen, which had been stretched a little over the first two games of this series.

If you looking for a rebound start for not only Shields, but the Rays offense, it would've been harder to get a better game then they did today. The Rays finished 3-3 on the first road trip against division rivals. I think we can all get behind that and say it was a positive trip. Now it's time to come home; let's get ready to raise some banners tomorrow.