Who wasn't extremely nervous last night when Troy Percival came into the game? If you have your hand up, you're a liar. When your closer is warming up in the bullpen and everyone bemoans the fact that he's about to enter the game...well that's not good. When Percival started to waddle in from the pen to begin the 9th inning I wrote "game over" to Tommy and RJ, and I can't believe I was alone in that sentiment. 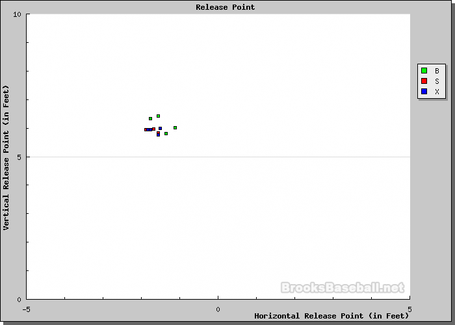 Look at Percival's release points. They're scattered all over the place. Normally for a good pitcher, or even an average one, all the release points are clustered in the same spot, but Troy Percival doesn't roll like that. It's very difficult to be an effective major league pitcher when you're throwing the junk that Percival is while releasing it from 75 different positions. Not having a set release point is going to mess with your control, and that's exactly what happened last night. Look at the chart below. The balls range from nearly hitting the batter in the face to bouncing in the dirt so far off the plate that Hernandez had to jump two feet to his right to stop it. 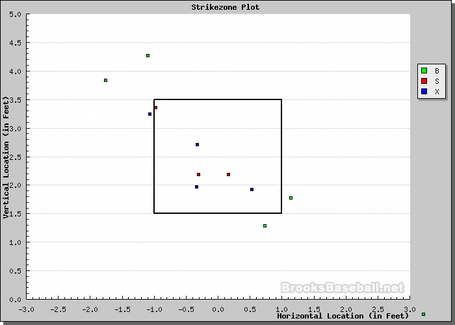 When he did manage to get the ball over the plate, it wasn't pretty. Cody Ransom laced a double, Jose Molina hit a hard line drive that was luckily right at Willy Aybar, then Jeter and his scrappiness came up with an RBI to put the Yankees ahead.

Percival didn't blow a save yesterday, but he may as well have. Last April, Percival somehow tricked his body into believing it was healthy for a month, then it woke up from its beer fueled coma, realized it was horribly out of shape, and broke down. There's no trickery this season, it's just broken down. At the end of the year the Rays, Red Sox and Yankees are most likely going to be separated by a couple of games at the most. How many more times can the Rays afford to let Percival cost the team wins? As R.J. noted yesterday, the Rays have taken sunk costs with relievers before and it may be time to do it again.