I hope this doesn't become a meme around here, but the Rays wasted another good effort from their starting pitcher. However, this time the offense was the main culprit as the Rays would knock on the door, but only score two runs. The offense is definitely frustrating as R.J. pointed out last night. The Rays are getting on base and getting into scoring position, however if somebody doesn't put the ball over the wall they don't score. But I'm not here to talk about the offense; I want to talk about the improved start by Jeff Niemann.

We all know how Jeff Niemann's first start went. He let five runs across before getting one out, however, last night he was much better and allowed just two runs in six innings with both of the runs coming off a Jermaine Dye two-run shot in the second. Other than that home-run, Niemann was unspectacularly spectacular.

We barely saw any movement on Niemann's fastball last night, yet it was well located. He struck out three batters, but only got around 6% swinging strikes. Even though he gave up nine hits, the only trouble he got into was the sixth inning and well that's a whole other story. Regardless of how he got into that jam, he was able to get some key ground balls off his fastball in that inning which was a welcomed surprise.

In something we saw quite a bit with some of the Rays harder throwers last year, Niemann took a little velocity off(about 1-2 mph) of each pitch in order to have better control. If you look at the strike plots from game 1 to game 2, you can see that Niemann had much better control of his four seam fastball which is his go to pitch. 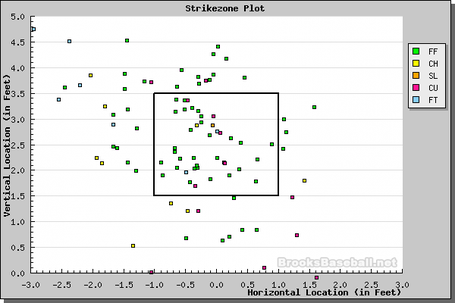 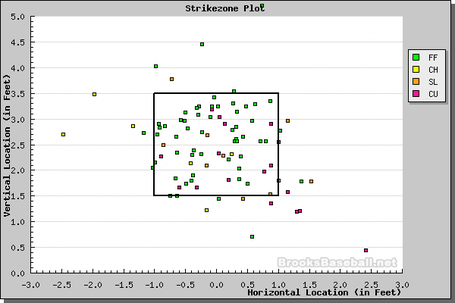 Niemann's fastball sat around 91 mph last night maxing out at 93. In the first start he was averaging closer to 92 mph and maxing out around 95. While he still threw the heater over 60% of the time (63%), the usage was down from his first start (67%). Niemann used his curve ball about 5% more last night or around 19% up from the 14% in Baltimore. He also went to his slider quite often. After throwing just one slider against the Orioles, he threw 10 against the White Sox.

As for release points and fatigue, Niemann's release point was consistent from start to start which is good. He is repeating his delivery which every announcer says "has a lot of moving parts." On the fatigue side, Niemann seemed to get tired in the fifth and sixth innings, but velocity wise he stayed closer to his average rather than just falling off the chart like he did six days ago.

While Niemann is now 0-2 with a 6.35 ERA/6.12 FIP, he is improving. I'd also like to point out that the Rays offense has provided him with two runs of support in two starts. Six of the eight earned runs he's given up have come on two swings. Personally, I'd like to see him strikeout more batters. When you are 6'9 with a mid 90's fastball you should be averaging a better K/9 than 4.76, which is leading me to believe that Niemann's calling is in the bullpen.

Beside the health factors, I just think if Niemann became a two pitch reliever, his stuff would be more dominating. He could come in and just pump 95 mph from a 7 ft release point and then break of a 78 mph curveball.  If Niemann moves to the pen, then you can either use him as the long reliever and bump Lance Cormier into higher leverage situations like you saw last night. You could also keep Cormier in his current role and put Niemann in the high leverage situations. Or even better, just use both in both roles.

Even if Niemann continues to improve, his time in the rotation is limited. Just look at this line from the Durham Bulls box score: 5 IP, 4 H, 0 ER, 1 BB, 6 K's 65 pitches, 48 strikes, 16 first pitch strikes to 20 batters face, hit 96 mph on the gun(H/T to Sobsey). Yep, David Price is getting closer and closer.