Share All sharing options for: The Dynamic Duo: Dan Wheeler and Troy Percival Don't Blow It

Like every other Rays fan in the world, I held my breath/nearly threw up last night watching Dan Wheeler and Troy Percival attempt to get the final five outs of the game.  However, unlike the back to back games where Wheeler turned a one run deficit into a five run deficit and Percival blew a tie game in the 9th inning, they actually came through this time, as ugly as it may have been.

Let's start with Wheeler.  He came into the game with one out in the 8th inning and proceeded to strick out Dye and force Konerko to ground out to third.  The results may have been there, but the process could still use work.  According to PitchFX Wheeler's FourSeam fastball sat at an average velocity of 86.77MPH and topped out at 87, though the TV gun clocked it topping out at 89.  Either way, considering in his first appearance his average velocity was 88mph, a nearly 2MPH drop is obviously not good.  Although he didn't throw nearly as many pitches tonight as he did Tuesday the elevated release point that was a cause for concern in that game reared it's ugly head again tonight. 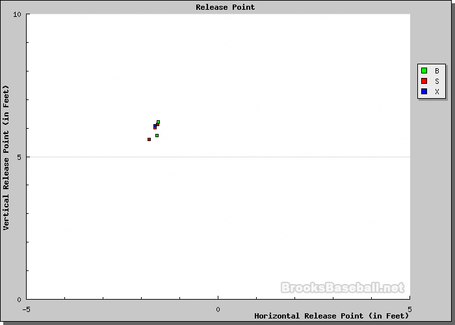 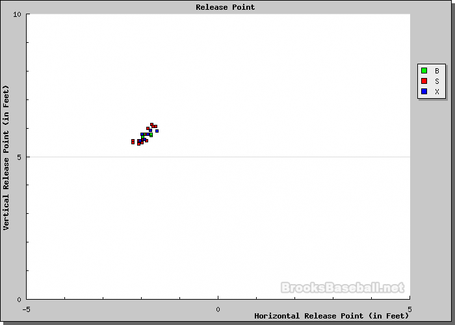 So even though Wheeler did his job tonight, there's still place for concern.

Troy Percival always seems to make it an adventure.  I wish there was one specific problem I could point to that is causing him to be less effective, but there's not.  Instead of relentlessly bashing Percival for scaring the bejesus out of everyone tonight, I'll just leave you with his Strikezone Plot for the night.  Alexi Ramirez...god bless your little Cuban soul for striking out on a pitch at eyebrow level. 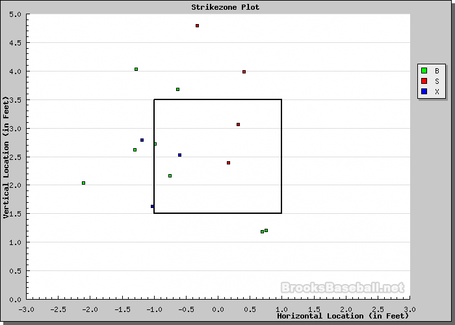