Matt Garza Struggles With Control In Blowout By White Sox

Share All sharing options for: Matt Garza Struggles With Control In Blowout By White Sox

Going into this weekend's games, Scott Kazmir and Matt Garza have been the best Rays' starting pitchers. However, both struggled with their assignments this weekend, and their biggest problem was their control or better yet lack there of. For an offense that seems to be in a team wide slump except for Carlos Pena, Evan Longoria and Jason Bartlett, the last thing you want is to trail early. On Saturday, the Rays were behind before they had a chance to bat. On Sunday, it wasn't much better.

We all saw Kazmir have an awful start on Saturday. He missed on his first 10 offering and walked six hitters and gave up two home runs in just four innings of work. While Matt Garza wasn't quite that bad today, the similarities between the two starts are there. Like Kazmir, Garza's control was off. If you look at R.J's strike zone plot of Kazmir you'll see that Garza exhibited the same lack of control today. He walked three batters (Thome twice) to lead off the even innings (2nd, 4th and 6th).

Here is a look at his strike zone. 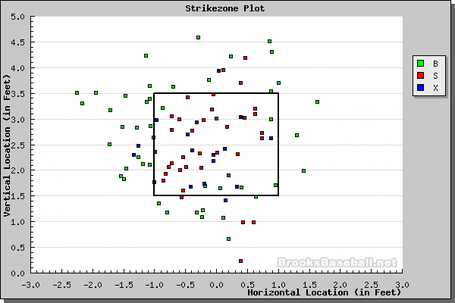 Also, similar to Kazmir, Garza's velocity was off a bit. Garza came into today's start averaging 93 mph on the fastball, but today was around 91. Garza gave up a second inning two run shot to A.J Pierzynski, but managed to keep the came close. However, the wheels came off on the sixth inning. After his third leadoff walk, Garza allowed a double, sac fly, another walk, and then made a throwing error on a groundball which allowed another run to score. After the error it was clear Garza's emotions were running high and he was lifted for Lance Cormier. Looking at the positives, Garza was able to limit his pitch count (until the sixth) by getting a fair share of ground balls (9) including two double plays.

Garza made two starts at the Trop this week and in both starts he received no help from his offense. On Tuesday, the Rays would remain hitless until the seventh inning against A.J. Burnett. Today, Gavin Floyd dominated the Rays with a fourseam fastball, a slider and a late breaking curve that brought Ben Zobrist to his knees.

Like much of the Rays season to date, today it just seemed like everything that could go wrong did go wrong. Opposing players find holes in the defense, a missed strike call turns into a hit, and the Rays always seem to be behind. Maybe the Rays are just a little fatigued. After being rained out opening day, they've played 13 straight games without a break. After dropping three of four and five of six overall at the Trop, maybe this West Coast trip is exactly what the Rays need; or at least that's what I'm telling myself.