Fittingly, the last time the Rays played Boston, it marked the end of the Red Sox season, this go around marks the beginning of a new one. As far as opening series match-ups go, you cannot do much better than these two teams. Some of the most memorable moments for the Rays came against the Red Sox, including the clinching of the ALCS. That series is still sweet in memory, even if bitter in the face of advancement.

Of course, the cost of excitement and good baseball is important games immediately. Head-to-records shouldn't matter too much assuming the Rays can take care of non-Sox/Yankee opponents on a routine basis. Still, remaining ~.500 versus both of those squads would go a long way in helping the Rays reach the post-season again.

It's Boston. It's Fenway. It's opening day. As much as I respect Theo Epstein and that front office, I would like nothing more than to obliterate their creation.

One of the common knocks on FIP is that good pitchers generally produce ERA that, when compared to their FIP, indicate over performance. Someone should let Josh Beckett know of this phenomenon. Over the last three years, Beckett has posted FIPs of 5.12, 3.08, 3.24 and ERAs of 5.01, 3.27, and 4.03. Throw in his 5.26, 2.95, and 3.55 tRA and you can see the casual fan likely underrates Beckett. As for arsenal, Beckett attacks primarily with his fastball that sits in the mid-90s but also features a curve and change. All combined, Beckett generates nearly 9% swinging strikes and ~40-45% groundballs.

Lester is a southpaw who saw his highest velocity average last year, hitting 92. Like Beckett, Lester relies on his fastball more than any other pitcher, but also throws a curve, a barely used change, and a cutter. Lester found far more success in the majors last year in part because of his ability to get first-pitch strikes nearly 60% of the time. Prior to 2008, Lester's career average was closer to 50%. By now I have a keyboard macro that features phrases like "improved" thanks to Lester, but here's another progression; Lester generated 48% groundballs last season, by far the most since at least 2006 including minor league stints. Lester was a pain in the Rays side most of last year thanks to his dexterity, we'll see if that continues.

Roughly 40% of Matsuzaka's plate appearances against ended in either strikeouts (22%), walks (13%), or homeruns (2%). That's not quite three true outcomes level, but it does tell you about all you need to know about Matsuzaka. He's a good pitcher, an above average one, but there is absolutely no chance in hell that he repeats that ERA given those peripherals. Matsuzaka throws a handful of pitches (92 MPH fastball, 82 slider, 89 cutter, 79 curve, 82 change, 83 split) but as we've seen, throwing a lot of pitches doesn't equal success. Sox fans can talk about how his pitches do not allow for solid contact, yet 2007 suggested anything but that, and how he's super-duper clutch with runners on*. We'll see this year, but frankly there's little reason for me to believe his strand rate is going to remain around 80%.

Basically the same lineup we've become accustomed to. Pedroia and Youkilis are two of the best players in the league and both were re-signed to long-term extensions reeking of savvy thinking. Youkilis took less walks last season but saw his power shoot up, not surprisingly, he also saw less fastballs and more breaking pitches.  Ortiz will likely rebound, not many players go from five consecutive 30+ wRAA seasons to being a sub-20 wRAA hitter. Then again, I guess many hitters don't go from consecutive seasons of sub-15 wRAA to being one of the best hitters in the league either, so who knows. J.D. Drew is the Sox version of B.J. Upton, only without the awesomeness, defensive ability, and speed. I guess that makes him absolutely nothing like B.J., minus the fan base that accuses him of being apathetic and faking injuries.**

Defensively, the Sox will no longer have the ability to run out a defense of Ellsbury/Crisp, which is fantastic news for opponents. More balls should drop as a result. Given the shaky health of Mike Lowell, Drew, Jason Bay, Rocco Baldelli, and David Ortiz, there is a lot that could go wrong for the Sox. Like, Jonathan Van Every starting in the outfield wrong. This Jon Van Every: 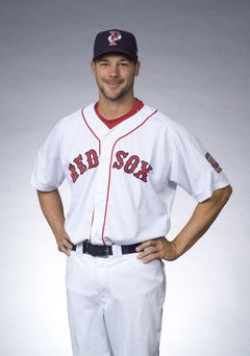 Do I really have to say anything here? Seeing Papelbon succeed is annoying, the only thing making it worthwhile is knowing he's not in the rotation. The amazing thing about Papelon is how well he pitched last year, and yet he barely topped Mariano Rivera -- 2.03 FIP to 2.01. Keep in mind, this is Papelbon with 10 strikeouts and 1.04 walks per nine. That's a 9.63 K/BB. Somehow, old man Rivera upped that with a 12.83 (!) K/BB ratio. RIvera had never topped 9 K/BB, not along 10, 11, or 12, yet he did last year and got zero attention for it. Both are amazing.

The rest of the group is solid-to-good, just as you would imagine. Basically, it's a staff of about four-to-five set-up types, a relief ace, and Lopez.

The bench looks okay. Kottaras figures to be Wakefield's personal catcher, given his experience with Charlie Zink. Carter has had a few nice offensive season in the minors. Green and Baldelli are former Rays, but really; how did Green get another gig? Well, apparently he's played the outfield and infield this spring. We need a name for these players who come up as middle infielders then play every position just to earn a spot. The super utility tag does them no justice and calling them out(field)casts is awful.

*Here's the amusing thing about this. I went in search of Edwin Jackson's double play rate in hopes that Daisuke would be higher***. Naturally, that didn't work out right. Daisuke had 138 double play opportunities last year and had 13 actually happen - or 9%. Edwin had 164 and 27 occur - 16% -- compared to their previous years Daisuke's DP% actually dropped by a percent. Edwin? Well, 166 chances in 2007, 12 double plays - 7%. Let's see how this progresses.

**If someone made me GM and told me to build an outfield consisting of stonefaces, these two would be automatics. Does Ichiro count? If so, him too. I would wonder who would change positions between Ichiro and Drew, but I'm guessing neither would care too much.

***Yes I'm comparing Jackson and Matsuzaka because of the walk rates. Unlike Jackson, Matsuzaka actually strikes people out. Another amusing tidbit that came from this, 2008 innings pitches per game started and pitches thrown per games started:

Matsuzaka allowed 18 grand slam opportunities last year, 11 for Edwin. 34 plate appearances with a runner on third with less than 2 outs and only 38% of them scored. Edwin had 39 and 44%. So, a ton of baserunners and ridiculous success in run prevention. Hm. Ever wonder what "regression" looks like when written in Japanese?

All statistics referenced come way of FanGraphs, StatCorner, or Baseball-Reference.