While enjoying tonight's eight run offensive outburst, I couldn't help but think back to Thursday's game and just feel bad for James Shields. Shields was the hard luck loser in a 1-0 pitcher's duel with Mariner's Ace Felix Hernandez. While he pitched an absolute gem of a ball game he ended up with a loss.

The key to the Rays offense may have nothing to do with the actual lineup; it may just be Scott Kazmir. The Rays have scored 24 runs in the four starts that he has made. The six runs per start are the most amongst Rays' starters.

After two starts it seemed like the old Scott Kazmir was back. But after the beginning of his last two starts it looked like a bit of the 2008 Kazmir not the Kazmir of 2006 or 2007. In his last start, Kaz threw 10 straight balls to start the game. I guess you can say he showed improvement tonight as only the first six pitches went for balls tonight. To say Kazmir was the cliché "wildly effective" would be an understatement. Just look at this lovely dart board looking strike plot throw by Mr. Kazmir. 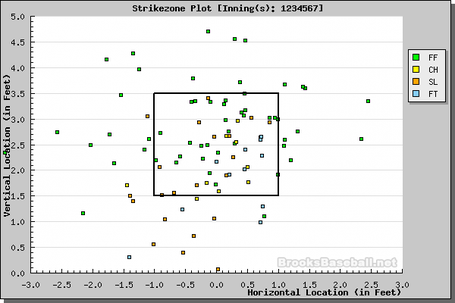 Hmm, fastball control much? To his credit, Kazmir's control was much better over innings 4-6 than 1-3. While Kazmir's pitches were all over the place, his release point followed. Along with a lack of command and lack of consistent release point, came a lack of velocity. As has been the case with Kazmir in 2009, his velocity sat below 90 mph and stayed in the 88-89 range. Only on occasion did he reach over 90 mph on the heater and according to pitch f/x he maxed out at 91.8.

However, the start overall was very good. As Dewayne Staats mentioned on the Rays broadcast, it was almost like two different starts for Kazmir. From the fourth inning on, Kazmir was a different pitcher. After using up 69 pitches after three innings, he needed just 27 pitches over his final three innings with 81.4% of those in the strike zone.

Another positive was his pitch selection, meaning he used his slider quite a bit. In fact, Kaz used the slider 22% of the time, and had excellent command of that pitch as it landed for a strike 71% of the time. While he only got three swinging strikes all night, all three of those came via the slider. With the swinging strikes low, so were the strikeouts for "Kid K." But yet another positive was the adjustment he made with the big lead. Instead of trying to rack up strikeouts, he pitched to contact which is exactly what you want to see in that situation. K's are nice, but when you're up 8-0 you want quick outs

Overall, it was the best and the worst of Scott Kazmir. Kaz said the near 40 mph winds affected him in the first part of the game, so the fact that the "best" part came after that is very good news headed into his next outing against the Twins.