Matt Garza Struggles With Control In Rays Loss To A's

Share All sharing options for: Matt Garza Struggles With Control In Rays Loss To A's

If no one sees a game, did it really happen?

Without seeing the game, it's hard to get a true feel for how Matt Garza performed today. But looking at pitch f/x, the box sore and result of the game, I'm going to go out on a limb and say Garza wasn't his best today. Like his last start, Garza lasted just 5.2 innings. Also, like his last start, he walked at least four batters which is not a streak you want to keep.

Control was again the problem for Matt. He threw 107 pitches, but only 58% of them for strikes. As you can see from the strike plot provided by brooksbaseball.net, Garza struggled with control of his four seam fastball the most. Unfortunately, he chose to throw this pitch around 69% of the time today which didn't make for the most efficient outing 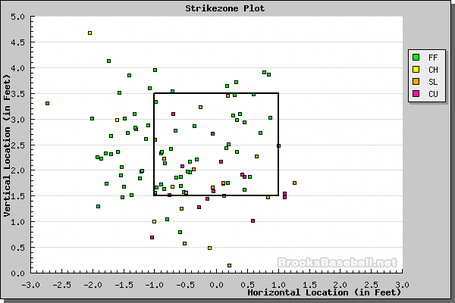 As for a few positives, it looks like Garza was able to maintain his velocity which was around 93 mph on the fastball and maxed out at 95. He was still reaching 92-93 even as he crossed the 100 pitch threshold, which tells me his arm is feeling good. It also looked like Garza had a good slider today as it landed for a strike nearly 80% of the time. However, the problem is it was only throw 14 times or around 13% of Garza's pitches.

You look at Garza and just say why? Why is a guy with so much talent struggling? But you can look at pretty much everybody on the Rays and ask the same question. As early April has turned in to late April, you try and not to let the frustration creep in, but I'd be lying if I didn't say I wasn't just a bit agitated about the how the team has played over the first three weeks of the season. The good news is we have a new game in a few hours, and a series victory would go along way in curbing some of those frustrations.