This Date In Rays History

Share All sharing options for: This Date In Rays History

A year ago today the Rays were 12-11 and weren't making us pull our hair out every night.  They were on a four game winning streak and life was good.  It was a simpler time.

The Red Sox were in town and young hurler Clay Buchholz was on the mound.  Buchholz was throwing a great game, allowing only a B.J. Upton double through seven innings.  The Red Sox were only leading 1-0, thanks to Edwin Jackson actually throwing a good game.  As the night progressed it looked like Buccholz was going to cruise to a complete game victory.  Clay Buchholz had not yet met Akinori Iwamura.

The 8th inning started off with a Gabe Gross strikeout.  Dioner Navarro then pinch hit for Shawn Riggans and slapped a single into right field.  This brought up Iwamura.  Not known for his power , Aki put a hanging curveball deep into the right field seats, flipped his bat, and gave the Rays a 2-1 lead in the process.  It would end up being one of the biggest home runs of the season for the Rays.  The team would win the following night to cap off a sweep of then first place Boston. 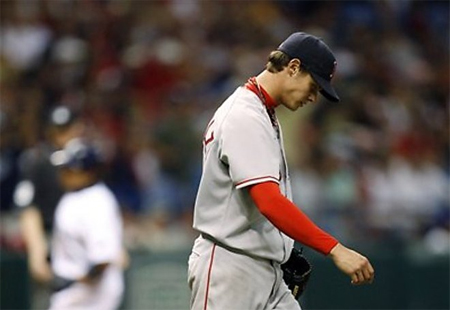