Andy Sonnanstine Remains In Control But Not Command

Share All sharing options for: Andy Sonnanstine Remains In Control But Not Command

The perfect case study for the command vs. control comparison is Andy Sonnanstine. Sonny exhibits tremendous control. Even though his walks are slightly up this season, overall his control has been there. Even in yesterday's loss, he still had control. He threw 68% of his pitches for strikes. However, Sonnanstine is lacking command.

Some pitchers can get away with great control and less command, but they better be throwing some 95 mph gas. When your pitches are around 86 mph and you're maxing out at 88, you better have command of the zone, and right now Sonny doesn't. Here is his strike zone plot from yesterday. 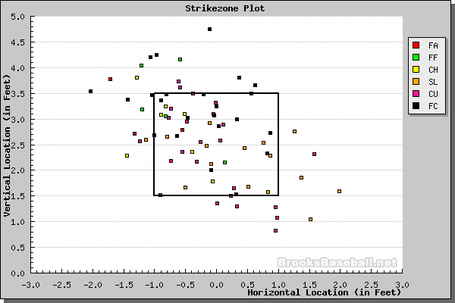 Again, Sonnanstine does not have too many pitches outside of the zone, but he does have way too many pitches in the wrong part of it. If you take a look at this plot you'll see Sonny threw a lot of curveballs yesterday (32%). Those are represented by the pinkish color on the chart. The bad part is most of them are coming above the "belt" area and probably look like softballs to the hitters at an average speed of 74 mph. It is the same story with the cutter. Sonny threw the cutter 29% of the time, but almost all of them up in the zone. 86 mph up is the zone is almost begging to be hit, and hit hard.

For comparisons sake, let's take a look at the strike zone plot of one of Sonny's better games from 4/19/2008. As you can see there is a big shift low in the zone. Sure there are a few hangers out there, but the majority of the pitches are at or below the "belt" area where guys who throw 86 mph should be staying. 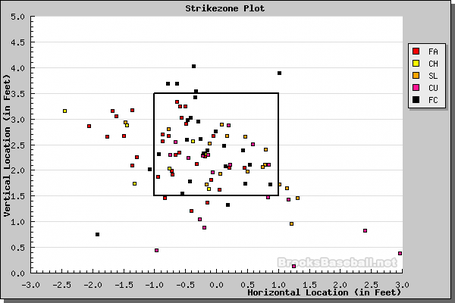 Sonnanstine is always going to give up hits; that is a fact, but if he keeps putting the ball into hitter's nitro zones those hits aren't going to be singles. As we've seen in the last two starts, hitters are getting extra base hits in bunches off Sonny and that's not what you want to see. With David Price's time coming and coming soon, we could have an intersting decision on our hands. Sonny may be in control most of the time, but he may be about to lose command on his job if he doesn't command the strike zone.