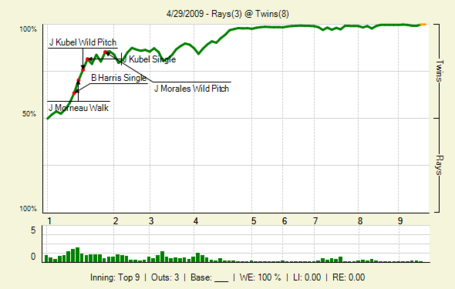 That seems completely unfair to Kazmir and way too fair to Navarro.

When I was in high school being a Rays fan was less about being cool and more about being rebellious. I should clarify; rebellious in the sense that it was unique, like a unibrow. One event that stands out in my mind comes when I was dating a girl named Katie. She wasn't the biggest of Rays fans, but more than most because she didn't like baseball one bit. We were an odd couple, to say the least, but she understood that I had needs she simply could not satisfy.

We dated for about a month before that faithful night. It was the weekend before homecoming and a friend of mine was holding a party. Katie and I agreed to meet up there because I wanted to see the end of the Rays and Yankees game before arriving. The game lasted longer than I had anticipated and when I arrived Katie was nowhere to be found, at least until I went upstairs where she was cornered by a guy.

His hands all over her, much to her dismay, as she attempted to wiggle away from him while telling him to leave her alone. I rushed over and pulled him off. He immediately looked down at my shirt which featured the Rays insignia (these were the days of green) and decided to comment "She has low standards if she's willing to date a Rays fan."

I could not believe this guy was brave as to insult something I cherished that much right in front of me. I figured he would not be so daring as to say it twice. I asked him what it was he said. He repeated. I flew off the handle and grabbed him by his popped collar, throwing him against a wall.

"If you ever and I do mean ever say something like that again I will put you through this wall. The Rays will be good before you know it."
At this point he had a bewildered look on his face. "What about her?" he asked.

"Same for her, she knows her place."

By now most of the party had gathered around to see a fight or something, but much to their disappointment nothing happened publicly. Katie dumped me, and my night ended in heartache.