Trying out a new occasional feature here. Not sure how many I'll do, guess it depends on whether people find them useful or interesting. Blame the rain day on the idea and execution. Oh, and the failure, if it comes to that.

Josh Beckett threw 441 pitches against the Rays last year.  321 fastballs (~73%), 117 curves (~27%), and 3 change-ups  (~0.6%). The majority of which came against left-handed hitters - nicely done Joe Maddon - and having this extra day allowed me to sift through the Pitchfx data from Beckett's starts against the Rays last year and pull some interesting graphs. First, let's look at Beckett versus each dexterity, righties first. 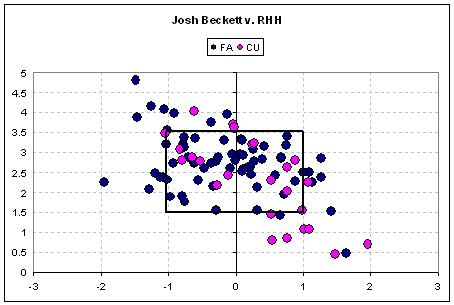 These are from the catcher's perspective. That means Beckett really didn't attack in one general area. Most of these came against the trio of righties in any given lineup - Upton, Longoria, Bartlett - and you can tell given the rather sparse spacing. Basically, Beckett attacked with fastballs and the occasional curve down and away. Enough with this though, let's look at the thick lefty chart. 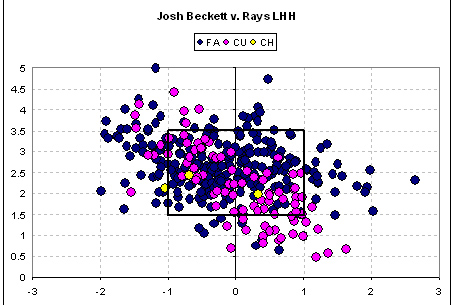 Oh my. I told you most of Beckett's games were against heavily left-handed lineups, here's proof. Beckett's curve seems to follow a diagonal path; either high and away, over the middle, or down and in. Beckett is unafraid to use his fastball inside or outside against lefties, and even snuck a few change-ups in there. Let's look at an individual chart. 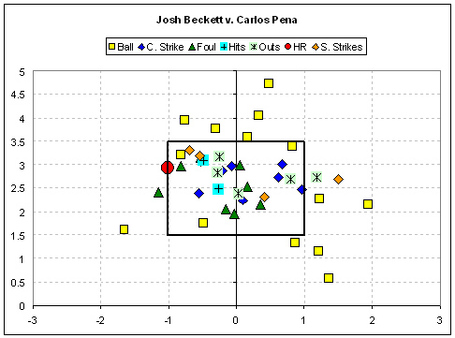 Well, okay, but what were those pitches that, when Pena got extended, he drove for hits? 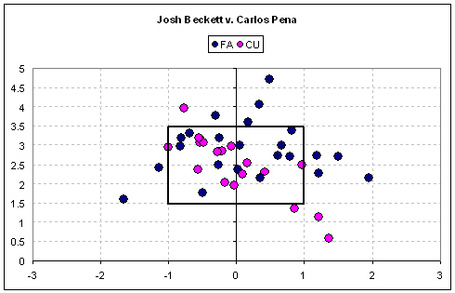 Entering the game tomorrow, Pena should know Beckett is going to throw close to 50/50 fastballs and curves, and have an eye for the outside curve. Clearly, Pena's strength against Beckett has been recognizing inside pitches along with a strikingly good eye for pitches out of the zone. Let's see if Beckett sticks to a similar gameplan this season, and whether Pena can take advantage, perhaps giving the Rays an early lead.