We're trying out a few new things here on DRaysBay in terms of the game recaps. For now we're going to try and go with a round table discussion/open thread. A few of the DRB writers will drop in at different times and give their individual takes on a few aspects of the game. The goal is to give you a few different perspectives while not stepping on each others toes and talking about the same thing. Of course, we also encourage you guys to give your takes on what went right and wrong.

Carlos Pena was a central figure in today's game. He had a few opportunities to get the Rays back in the game, but each time he came up to bat the result was the same; Strikeout, Strikeout, Strikeout, and Strikeout. Strikeouts are nothing new for Pena; he does it a lot. He's struck out three times in a game 45 times in his career. Today was the seventh time he has worn the golden sombrero. However, today Pena showed a very un-Pena like approach at the plate.

His first two strikeouts came via the swinging variety on a total of six pitches, including his first strikeout on three straight heaters. His third strikeout would be a back breaker as Pena represented the tying run at the plate with one out. Pena would strike out on five pitches thanks to a wonder set-up job by Josh Beckett. On the fourth pitch of the at-bat, Beckett threw a changeup out the outer half of the plate at 87 mph. The next pitch, a 96 mph fastball, would freeze Pena and catch the high inside portion of the strike zone. The fourth and final strike out would see Pena frozen once again. This time was courtesy of Justin Masterson on an eighth inning, 94 mph sinker that painted the black on the outer half of the plate. On the day, Pena saw 15 pitches in his four at bats with only three of those pitches going for a ball. His WPA of -0.176 was the lowest of any position player.

Lance Cormier wasn't perfect, but he did show a few of the things that made me a fan of his. Cormier was able to pick up James Shields and give the Rays 1.2 scoreless innings. He held the Red Sox down by throwing strikes and getting three of his five outs via the ground ball, his specialty. A questionable seven pitch walk to David Ortiz would be the only blemish on Cormier's stat sheet. He would get a double play ground ball in the next at-bat, but the Rays defense was unable to turn two. All-in-all it was good to see some of the stuff I've been talking about with Cormier transfer into live game action.~Tommy Rancel

As far as opening games go, this one was rather poor. Using Bill James' Log5 formula and plugging in last year's win percentage numbers, you would expect the Rays to win about 51% of the time. Take the road aspect into account and you're looking at what amount to a coin flip's chance at winning any of the games in this series. Today, we called heads, and the coin landed tails. It happens. Both of these teams are extremely well built and if you expect the Rays to play anything more than ~.500 ball against them, then frankly, you should adjust your standards.

James Shields was off today. Of course, he wasn't exactly helped by the strike zone: 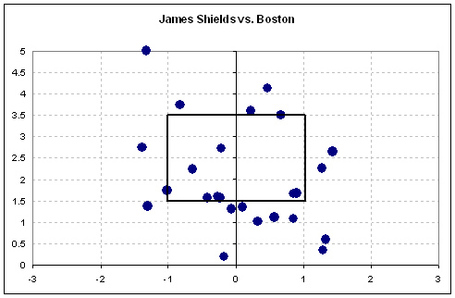 Yeah, I really don't know about some of those pitches either, although a few of the "bottom" pitches were to Dustin Pedroia. Early on, Shields seemed intent on using his fastball. Throwing only one change-up of the first 10 pitches, that in the dirt to David Ortiz. As the game progressed Shields went more and more to his breaking stuff, although for one set of pitches he worked primarily with his change.

Take poor control, throw a non-existent lower strike zone, and sprinkle in a few flatter than usual pitches, and that's James Shields' effort today. One other tidbit, Shields got five swinging strikes today - two on his change-up - that's a total of ~8.1% -- not quite at his previous levels, but acceptable.

Shields' next start will come in the Baltimore. Let's hope it's better than this one 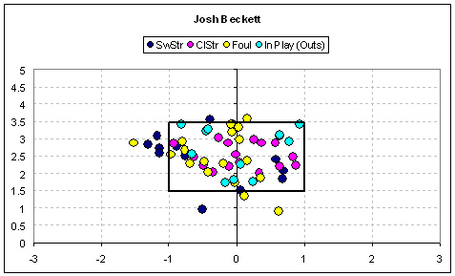 It was a shame the Rays struggled so mightily with men on base, because Aki Iwamura was setting the table quite nicely.  In a game where Josh Beckett dominated the Rays lineup one of the only bright spots on the afternoon was Iwamura.  The second basemen went 1-2, with two walks, a steal and a run scored.  He also only struck out once, as opposed to Gabe Gross and Carlos Pena who whiffed three and four times respectively.  Aki's two walks accounted for half of the teams total, while perennial 90+ walk men Pena and Patt Burrell put up goose eggs.  It was disappointing the Rays couldn't get on base more, give what a weak arm Varitek has.  They managed only seven base runners, but stole three bases.  An extra base runner here or there could have made a huge difference.

Another player who didn't totally suck today was Carl Crawford.  Coming off a season in which he was hampered by injuries all year, and I know this is based on an EXTREMELY small sample size, Crawford looked to be back to his old self.  Yes he swung at too many pitches, and chased a few others out of the zone, but given the team's output his day wasn't so bad.  After Iwamura walked to lead off the 6th Crawford followed with a double, giving the Rays men on second and third with no outs, only the 3-5 hitters failed to get a ball out of the infield.  The middle of the order obviously won't be this bad all season, so if Iwamura and Crawford can put together more games like they had today the team should be just fine.