Scott Kazmir's slider has dominated this site's topic list for most of the last six months. Naturally, his first start was highly anticipated for reasons far beyond simply his pitch usage, but it certainly added to the intrigue.

Pitch usage; about 18% change-ups, 17% sliders, and 65% fastballs, a step up from last year's fastball heavy diet. Kazmir's fastball topped out at 94 miles per hour, and averaged 91. Not sure if that's a conscious effort for better control or not, but he was getting quite a bit of fastballs for called strikes on the outside corner to righties.

Okay, let's get to the charts. 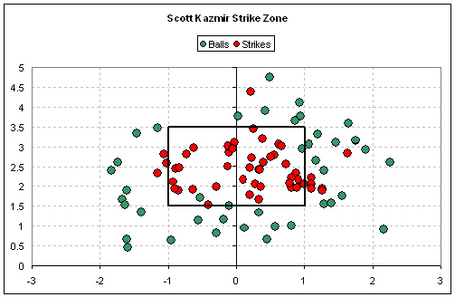 Can you say generous outside corner versus righties? Give credit to Dioner Navarro and Kazmir, they picked up on the wide corner early and went to it often, usually to begin an at-bat versus a right-handed hitter. To be fair, I expected a lot more outside of the normalized strikezone box. Now let's focus on the break on his pitches. 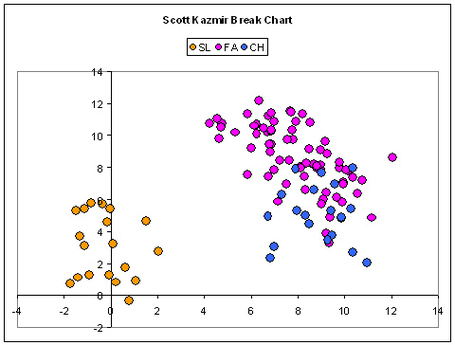 Pretty sure a few of those sliders are actually fastballs categorized incorrectly for whatever reason. His fastball moved, his change-up looked like his fastball, and his slider got in to righties. Kazmir's stuff looked the best that it has in a while tonight. The only issue was finishing hitters. He's definitely able to get ahead of them and keep getting ahead of them.

Without making any big claims on one start, tonight could mark the beginning of a fun season.