I'm willing to give Troy Percival a chance to redeem himself as long as he is forthcoming with his injuries, but holy crap performances like today scare me. 20 pitches, half were balls, and 14 were fastballs that sat around 91 and maxed out at 93. Here's how Percival started the inning:

Here's how his fastball moved: 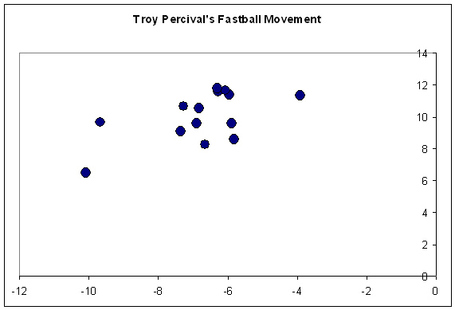 That's an average h-break of -6.8 and v-break of 10.01. Not awful, but here's the problem, he couldn't control it worth a damn. Below you see the fastball command; a quick count reveals that only four fastballs were within the normalized zone and not near the middle of the plate. Two were right down the middle, a handful of others were in prime hitter locals, and a few were up and in to righties. 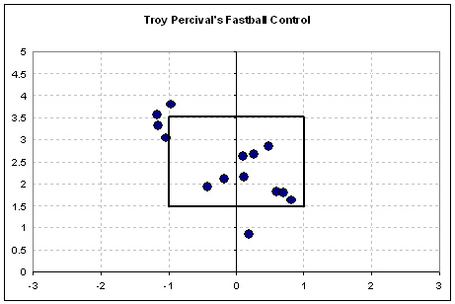 Percival had to know he didn't have his best command today, and yet he decided to be fastball heavy. That's poor judgment, and frankly that has been the problem with Percival all along.