History was made last night. No, Matt Garza did not pitch the first perfect game in Rays' history (infield single, seriously?), but history was made nonetheless. In the 4th inning, Michel Hernandez turned on a Josh Beckett offering and planted it into the seats of section 141 in left field, which we will now rename the "Michel Hernandez Power Tower." For the 30 year-old Hernandez it was his first major league home run and it couldn't come at a better time.

For the first time all season the Rays actually got production from the catcher's spot. With Dioner Navarro struggling (I'm being nice), Joe Maddon decided to give the seldom used Hernandez the start with Matt Garza on the mound. Not to start any controversy, but there just seems to be something about Garza and catchers not named Navarro. I know Navi was the catcher in game 7 of the ALCS, but some of the best regular season starts we've seen from Garza have come sans Navarro behind the plate. Some things you can't explain in baseball and that seems to be one of them. However, this is Michel Hernandez's article to shine; after all he can show this to his grand kids one day and say "I was a feature story on draysbay.com."

Again with Navi struggling, Maddon made the call to start Hernandez. Hernandez joined the Rays in late 2008 from the Pirates organization, and was the backup catcher for the playoffs; however his duties in the playoffs were limited to catching bullpen and eating bubble gum. He made his profession debut in the Yankees organization back in 1998 and has spent the better part of the past 11 plus years in the minor leagues. He briefly made a five game appearance with the Yankees back in 2003, but would not reach the majors again until his second stint in the Rays organization.

Coming into this game Hernandez was a career 6-28 in the major leagues. He nearly got six hits tonight as he went 4-5 with a HR and three RBI. Not only did was it the first time he hit a major league home run, but those three RBI were the first hree runs he has driven in as a major leaguer. Despite the offensive outburst, Hernandez is on borrowed time in a Rays uniform. Shawn Riggans is recovering from shoulder tendinitis and could start a minor league rehab assignment next week. However, Hernandez will always have tonight and maybe a few more nights if Dioner Navarro keeps hitting like...well Michel Hernandez.

Actually, maybe that would be a good thing. 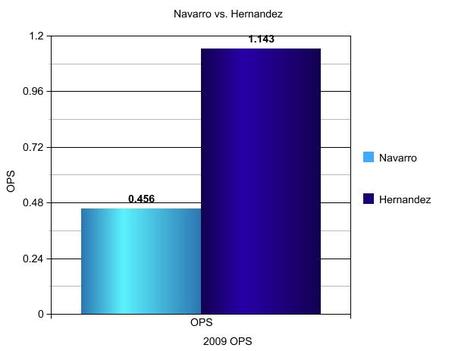