Still Some Questions About Andy Sonnanstine

Share All sharing options for: Still Some Questions About Andy Sonnanstine

I don't know what's wrong with Andy Sonnanstine. Forget the eight hits or two earned runs tonight. Honestly neither matters all that much to me.  Instead focus on the four walks and lone strikeout. I'll give him a pass for the walk to J.D. Drew because, well... 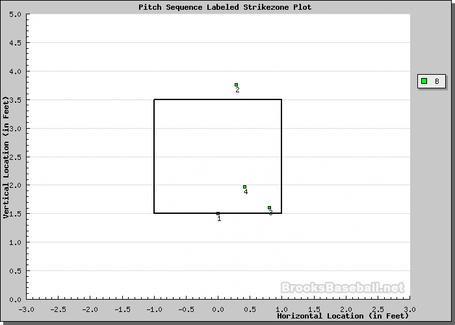 Even if you choose to debate the borderline pitches, you still have to admit that pitch number four is a strike to just about any batter in the league.  After looking through a few other matchups it's pretty clear we need robot strikecallers. I can go on a long rant about how tradition shouldn't stand in the way of enhancing the game, but either you agree with that or  don't. Whatever.

Tonight Sonnanstine made batters whiff on 6.5% of his total pitches thrown. All told that's not too far off his seasonal average, which is actually higher than last year's total. The difference has been the line drives hit. Nearly 30% this year per the BIS numbers, which somehow lasted through tonight's game. Pitchers don't make it to the majors giving up almost 30% line drives. Sonnanstine's career average is 18.1%. Combine that with slightly worse control than last season (whether intentional or not) and Sonnanstine hasn't been quite the same pitcher.

Of course I guess you could say that about every pitcher on the staff, but Sonny can't afford to walk four batters a game. He just can't put free baserunners on when his pitches are prone to contact. Oddly, his contact rates are down as are his homeruns. That doesn't really make sense. If Sonny is being hit harder, then why aren't some of those balls leaving the park? And if he's being hit less often, then where does that even fit in?

Sonnanstine has become a cutter/curve/slider pitcher. That new and improved change-up? Yeah, it's down to 3% usage.  Does that play into his performances? Maybe, I don't know. That's been the problem far too often this year.

I guess the two things to take away from this start are:

Sonnanstine probably wasn't helped by a shape shifting strikezone against a good lineup.

At least most of the hits were on the ground.