The New And Improved Matt Garza Is Aces

Share All sharing options for: The New And Improved Matt Garza Is Aces

Lost somewhere between Dan Wheeler giving up another late inning run and the ninth inning meltdown against Jonathan Papelbon was another gem thrown by Matt Garza. For the third straight game Garza pitched at least seven innings allowing three earned runs or less.

The biggest change for Matt over the past three starts has been control. After averaging just 59% strikes over his first four starts, Garza has bumped that up to 65% over this last three. With the increase in strikes has come an increase in K/BB rate. In his first four outings Garza had 24 strikeouts and 14 walks, a 1.71 K/BB. However, if you look at the table above you'll see that Garza has a fancy 18:5 K/BB over the last three games or a K/BB rate of 3.60.

The difference in the numbers could be due to a variety of factors. The one I wanted to look at specifically was pitch selection. Garza has thrown three main pitches this year: a four seam fastball, a slider and a curveball. He has thrown his change-up on occasion, but he's gone starts without throwing it at all or throwing it less than 1% of the time. Here is the difference in usage from the first four starts to the last three:

It doesn't seem like much, but Garza has thrown about five to seven more curveballs per start and that has upped his percentage quite a bit. The increase in curveballs could be throwing hitters (especially left handed hitters) off quite a bit. Garza averages about a seven mile difference from fastball to slider, but over a 17 mile difference from fastball to curveball. To a left handed hitter this can be extremely frustrating. Look at the plot against left-handers yesterday. 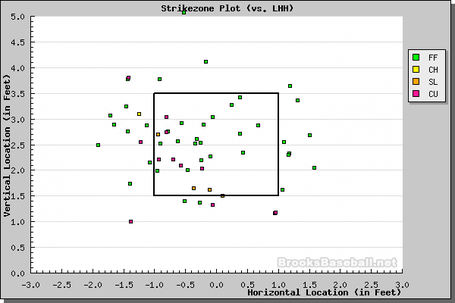 Note Garza's FB was averaging 94.40 mph last night, while his curve was just above 76.  A fastball rising and darting away at 94 followed by a curveball falling about eight inches and breaking in at 76 mph causes a lot of confusion. As I pointed out a few weeks ago, his release on his curveball is slightly higher than the fastball, but even if it the hitter sees this, the time from release to crossing the plate isn't enough for most to make the switch. There are those occasions where he could hang a curve to a lefty and get taken deep, but so far so good.

Garza has been helped by a lower than normal BABIP this year. At .218, his BABIP is 80 points lower than his career level. However, his line drive, groundball and fly ball percentages are all within 7/10ths of his career average. This means A) he's been extremely lucky or B) with improved control has come improved command and hitters are just taking what he is giving them, which are pitches that can't be hit for much. Regardless, his BABIP is due to regress and this is why improving his K/BB is so important. If you are going to give up more hits at some point, don't give out free passes to go along with the hits. Striking out more batters while doing this is a good thing.

Garza is only getting a 24.6 O-Swing% which is about 2% less than normal, but his first pitch strike percentage is steady at 55%. Hitters are making more contact in the strike zone which would lend one to believe Garza is "hittable", but better command by Garza is putting those pitches in places where hits go to die. The Rays staff as a whole has been down so far this season, but Matt Garza continues to mature, improve and impress. It's only a matter of time before we start referring to the crane as the ace.

(H/T to fangraphs and brooks)