Share All sharing options for: Bullpen Bright Spot In Loss

There's not much to say about tonight's game.  Andy Sonnanstine pitched poorly, Mark Hendrickson pitched less poorly.  If there is a positive that can be taken from this loss it's that the bullpen, which has had it's share of issues this season, was excellent in relief of the not-so-excellent Sonnanstine.Grant Balfour, J.P. Howell, Joe Nelson and Dan Wheeler combined to throw six innings of two hit baseball allowing nary a run in the process.

It was especially good to see Balfour pitch so effectively considering he had allowed 9 earned runs in 11.1 IP this season.  He only struck out one batter, but threw just 23 pitches in his two innings.  We've been over this before, but even though his K/9 is down and BB/9 is up, his BABiP is a very high .383.  That's going to regress back to the mean and Balfour is going to give us many more outings like tonight, though hopefully we'll never see him pitching in the third inning again.

Aside from the bullpen there wasn't much to take from the loss.  B.J. Upton nearly hit two home runs, flying out twice to the warning track.  I guess that's progress?  Hooray?

This picture of Longoria says it all.  Losing is depressing. 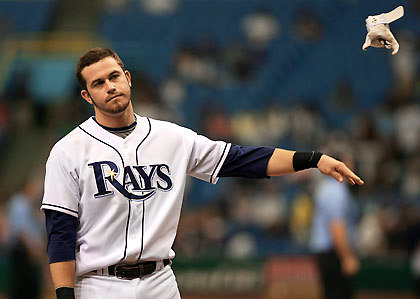