You probably don't know me, and I don't personally know you, but we have an issue.  Please stop using your fastball so much. Tonight you threw 57 fastballs out of 88 total pitches, roughly 65%. Your velocity looked great, averaging 92 miles per hour and topping out just over 95, but your movement was still pretty bad; less than three inches of break towards righties. Your change-up was thrown four times, your slider nine times, and your curve 18 times.

I've written multiple times about how you should use your fastball less, but allow me to outline it again once more.

1. Your control over the pitch is questionable.

Here's the PitchF/x graph from the start: 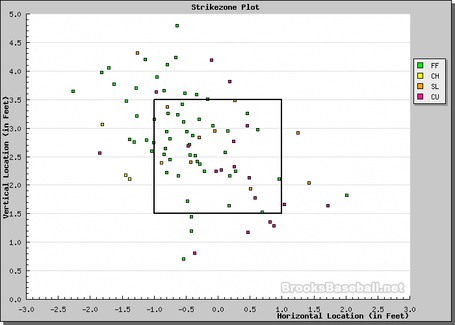 See all of that green up and towards right-handed batters? That's bad. It's not just when you face left-handed hitters either, and it happens at all times during the count, see: 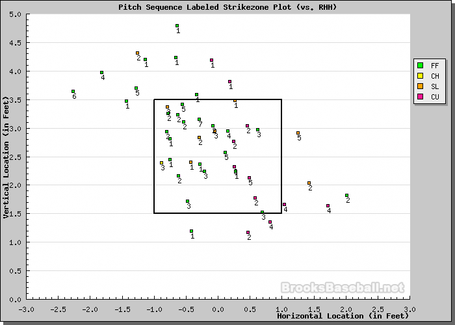 Of those 57 fastballs, 58% were strikes, which is slightly better than your slider, but worse than your other two pitches. Having loose fastball command and control are common themes in your starts and that's unfortunate.

2. The movement is below average.

The league average right-handed pitcher has a fastball that breaks horizontally six inches towards right-handed batters. Your fastball only breaks 3.5 inches. In terms of vertical movement, you are above average by about an inch. Does that really make up for the lack of horizontal break? I don't think it does.  In fact, tonight you got batters to swing and miss five times, those whiffs were on four curves and a change. Your fastball isn't good enough to throw 70% of the time. It's just not.

3. Your pitch selection is hurting you.

Josh Kalk (now an employee for the Rays) did a ton of research on how pitch sequences affect performances. He found that on league average, after throwing a fastball the curveball had a run value of -0.41, that's only behind the split-finger fastball and the sinker. That means following up a fastball with a curveball - especially one like yours - is a good idea. A fastball after a fastball only has a run value of -0.24. That's nearly half. Let's go through each of your pitches and what maximizes your production.

Of course that's league-wide, not for any specific pitcher, but it doesn't take math to figure out when you results and when you don't. Look at what the results were for your curves tonight:

Batters hit your curveball hard one time in seven tries.  Now let's look at your fastball:

6 of the 22 times hitters tried hitting you fastball, they hit it into the outfield on a fly ball or a line drive.

It's not a coincidence that batters don't hit your curveball as well. So use it more. Use it after a fastball, use it after another curve, don't use it after your change or slider. It's okay to use curves back-to-back, and sometimes three times in a row. Hitters rarely see those pitch chains, so use that to your advantage. Go back to the section about pitch sequences and study those patterns, then adapt them to your gameplan.

Stop thinking of yourself as Josh Beckett or A.J. Burnett and try pitching like Wandy Rodriguez. His fastball doesn't break very much horizontally either, it's not very fast, and he has a pretty good curveball. Right now, he's in the midst of the best season of his career and he's using 34% curves and 53% fastballs. Last year he used 30% curves, 63% fastballs. In 2007, 67% fastballs, 25% curves. Much like his FIP, his fastball percentage has declined each of those years. Coincidence? Perhaps.

Look Jeff, I'm rooting for you. You seem like a likable guy and you pitch for my favorite team. That's a good combination for you and me. Too much of my time has been spent talking about you and thinking about you leading this team to greater things. Sure, you had a role in last year, but not too big of one. The thing is, unless you change your pitching approach, you will never be a long-term starter for this team. You might become a solid reliever, maybe even close one day, but if you really want to start you have to change.

Your dreams were always with you starting that big game. You want to be a starter. If/when they demote you to the pen, I'm sure you'll take it with a smile and the eagerness to try something new, but don't settle. Do better, make them keep you in the rotation when David Price comes up. The only way to do that is to pitch better, and to pitch better you have to curb the fastball usage.