Much like his last start, James Shields was cruising through the first part of last night's game. After three innings he had allowed just two hits, no walks and had five strikeouts, each coming on a swinging strike. He had command of his fastball, change-up and curveball, and things were looking good. However, too much like his last start Shields ran into a bit of trouble and lost his cool again. After multiple bloop hits and a costly two out error by Akinori Iwamura, the wheels fell off again for Shields and at he end of the fourth inning Cleveland had a 5-0 lead.

Normally, Shields gets into early trouble, but usually escapes with the game in reach. Then in Shieldsian fashion he goes and eats up seven innings and keeps the Rays in the game. However, the past two starts he's has just been a little too emotional. To Shields's credit, he always takes the blame for his performance and did so last night. He knows that his emotions have been his worst enemy as he has looked pretty good at the start of games.

"My emotions got the best of me," Shields said. "It's something I don't do normally. The other team kind of saw that and fed off it. The whole emotion of the game kind of went down. If I bear down and make some pitches after that, we get out of the inning. I put that on me."--TBO.com

Stuff wise Shields was at his normal 91 mph and actually threw more change-ups(30%) than anything else. Even though he battled a slightly inconsistent release point, he was throwing all of his pitches for strikes and may have felt a little bit of a squeeze at times, but this was hardly the Rays' only problem. 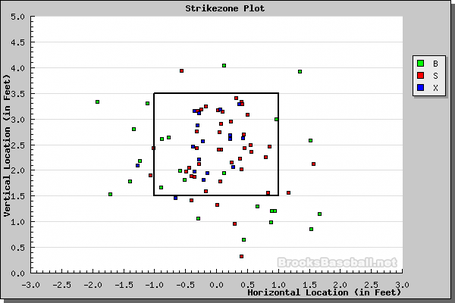 As R.J. mentioned last night, Grant Balfour was around 91 mph on his fastball and he maxed out at 92. I don't know how concerned we should be as Balfour has lost between two and three miles on his fastball since last year. He has worked some longer outings recently going 20+ pitches for the second time this week. Hopefully once (if) the rotation rights itself, Balfour won't have to be an innings eater in the middle of the game. To Balfour's credit he did throw 71% strikes, struck out three and walked none, but tired out in his second plus inning of work. He also threw five sliders which is almost a season's worth for him.

Overall, the Rays bullpen has been overworked recently and we are starting to see that translate into a bit of ineffectiveness by guys like Joe Nelson, who has been steady this season. The Rays will turn to Scott Kazmir tonight, and hope somehow he can go deep (seven plus innings) into the game for the first time in nearly a calendar year.