B.J. Upton Is Back While Brian Shouse Cruises And Joe Nelson Closes

Share All sharing options for: B.J. Upton Is Back While Brian Shouse Cruises And Joe Nelson Closes

We've said on this site for weeks now that B.J. Upton was going to start putting it together any time now.  It seems like that time has come.  Since sitting out a game against the Yankees with the flu, Upton has hit .273/.351/.455 with 4BB and 6K in 37PAs.  Upton is looking like he's finally catching up to the fastballs that were being blown by him at the start of the season.  In the past two games he's taken two inside fastballs and deposited them in the left field seats.  Those are two balls that just a week ago it didn't seem like Upton could get to.  The American League should be scared.  The Bossman is back in business.

It was interesting to see Joe Nelson getting the save opportunity.  Troy Percival is still the team's designated closer, and even though he pitched the night before, didn't throw many pitches in doing so.  I'm not saying I wanted Percival in the game by any means.  I'd actually like him gone completely with the closer job being handed over to Nelson or Howell.  It was just a surprising move on Joe Maddon's part.  Nelson pitched a perfect 9th today and I think is more than capable of closing games for this team without the normal theatrics of a Troy Percival performance.

I normally rant and rave about Brian Shouse's usage, but tonight I was very happy with it.  Shouse began the top of the 7th inning against the left handed Grady Sizemore, who promptly grounded out to first.  That's what any good LOOGY should do in that situation.  The next batter brought Asdrubal Cabrera, who over his career has hit well against lefties but is only OPSing .585 against them in 44ABs this season.  Shouse retired Cabrera on three pitches.  As you can see below, Shouse got a little help from the umpire, but when you're Brian F'ing Shouse you earn those calls: 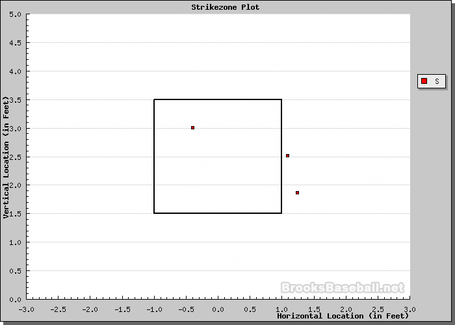 I didn't expect Shouse to get out the hot/switch hitting Victor Martinez, but because Shouse gets a fair amount of groundballs and the lefty Choo was up next, I was ok with leaving him in.  Martinez singled, bringing the go ahead run to the plate.  But because Shouse is a lefty crusher, it didn't take him long to dispose of Choo: 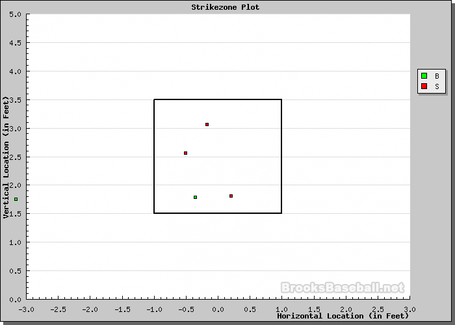 You end up looking pretty silly when you strikeout looking against the 72mph heat of Brian Shouse.  It was an impressive outing by Shouse, and good managing by Joe Maddon.