120 pitches from Garza and he wasn't at his absolute best, but he gave most of the pen a much-needed breather. 89 fastballs and 13 sliders and curves. The velocity differences are striking:

10 swinging strikes, 9 on fastballs, evenly split against lefties/righties. The results were good, the processes were altered by the environment. As the Fanpost on the right sidebar shows, Garza was squeezed on a few at-bats, so you can't be too critical of his outing.  Although that's not to say the control displayed was pinpoint today, he definitely missed in to righties quite a bit: 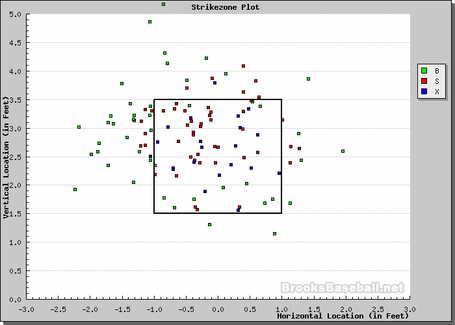 Grant Balfour had an interesting outing. His fastball velocity was back in the usual 93-95 range, suggesting he was simply suffering from fatigue last time out. Balfour threw 12 fastballs and five breaking pitches, whether they be sliders or curves. The so-called curves saw a velocity differential of about 10 MPH. Balfour threw back-to-back curves to end the Kelly Shoppach at-bat, one fouled off, the other down and away for strike three. The pitch also registered a swinging strike and a called ball. Not too shabby.