One word about fastballs. All along, Gameday has been classifying everything as a four-seamer. I don't think that's the case. Look at this, compared to this: 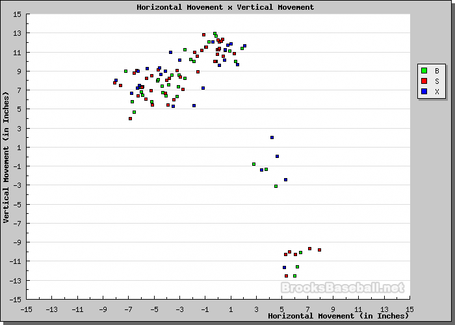 It appears like there's two distinct clusters at work. If this is the case, then all of those numbers we've been talking about for average movement are pretty useless. That doesn't mean he should still be using 70% fastballs, and heavens no 80% fastball nights, but it does mean he can throw a fastball that has a lot more tail than the one usually credited to him. Without going through each start on a hand-by-hand bias I have no idea how much the data is off. Rather than using false data, let's just toss it out. We know that Niemann's four-seamer moves up, but little horizontally, his two-seamer rides in to righties. The four-seamer is the pitch getting hammered more often than not, while the two-seamer is generating grounders at a pretty good rate, here's tonight's view: 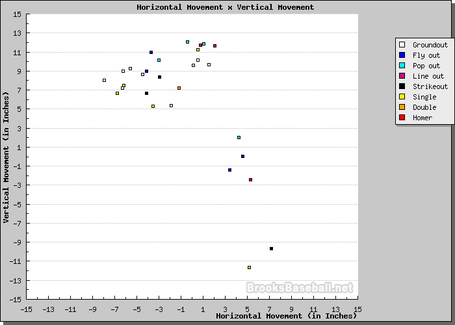 As for Isringhausen. Six four-seamers (cuts inside to righties, average velo around 90), two sinkers, a pair of sliders, four curves, and a single cutter. Everything moved, and almost everything wound up over the plate, most of it coming down the middle. Isringhausen's inning could hardly have came in a lower leverage situation, but whatever, he looked a lot more crisp than expected. Interested to see more of him moving forward, even if I'm not going to lower my expectations of a ~4.75-5 FIP quite yet.