Share All sharing options for: Fun Fact About Evan Longoria's Contract to Date

So far in his young career, Evan Longoria has been worth 8.1 WAR. Translate that into dollars and you get 36.5 million. In terms of actual payroll, Longoria has and will cost the Rays a little over a million for these two seasons and a little under 18 million through 2013. Basically, the Rays have gotten twice what they'll pay Longoria over the next ~four seasons all within Longoria's first ~680 plate appearances*. Yep, that's just ridiculous.

Please name your first and second born after this man: 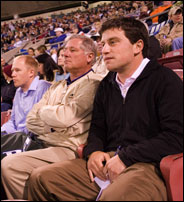 *This doesn't mean he hasn't to keep up this rate either, it just means at the end of the year he has to be worth at least 2.8 WAR. Last year he was worth 5.3.