Dan Wheeler Is The King of Low Leverage

Share All sharing options for: Dan Wheeler Is The King of Low Leverage

Dan Wheeler was very effective last night, with a fastball clocked an average speed of 87.40MPH.  In his past couple of outings Wheeler's fastball has been a mile an hour or so faster than it was earlier in the season.  It's still not where it used to be, or needs to be, but i'll take the improvement.  Wheeler threw his FourSeam Fastball 10 times last night for a strike percentage of 90(!).

The bullpen as a whole was great last night.  J.P. Howell and Joe Nelson combined with Wheeler to allow only one hit and two walks while striking out five in 3.1 innings of work.

Here's Wheeler's strikezone plot from last night.  Only one ball was put into play. 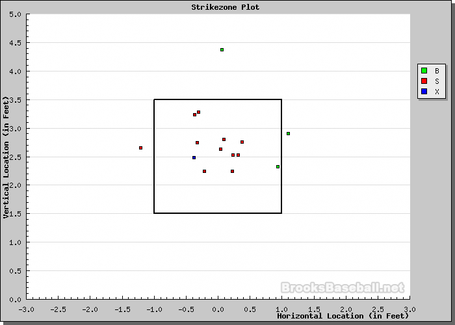