Share All sharing options for: Scott Kazmir Frustrated And Ineffective Against A's

The last game I was able to watch live before my little hiatus was the Rays seven-run comeback against the Indians. You remember the story; an awful Scott Kazmir lasted just 3.1 inning allowing seven runs on 10 hits, but the Rays rallied and walk-off thanks to the Boss. Luckily for me, I returned home last night just in time to watch the former Kid K make his next start. Foolishly, I was semi-excited to see this new and improved Scott Kazmir. According to Kazmir himself, the "mechanical issues" he's been dealing with since last year are almost over and he's feeling great.

Kaz would once again struggle against left handed batters which for a left handed pitcher isn't good. The A's would get RBI's from Jason Giambi, and Adam Kennedy and each would reach base multiple times against Kazmir. He refused to work inside against lefties and kept almost everything in the middle of the strike zone against them 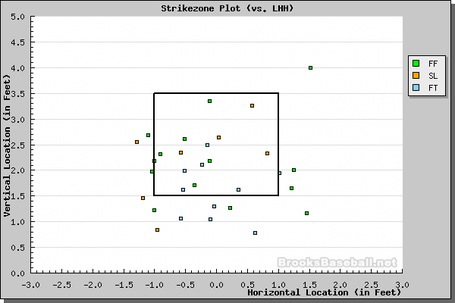 When you are throwing a fastball over the middle of the plate at 89-90 mph, and you do not have the ability to command where that is going, that is trouble. Not for just Scott Kazmir, but for every other pitcher. We've discussed this with Jeff Niemann, but if your fastball isn't very good then it probably isn't a good idea to throw it often. Kazmir did just that last night throwing fastballs for a whopping 81% of his pitches. The infamous slider was only thrown 13 times out of the 93 pitches thrown.

Once again, we are left with the question: what is wrong with Scott Kazmir? I don't think anybody really knows the answer to that question, not even Scott Kazmir. After his latest poor outing Kazmir seemed very frustrated as he had no clue how to answer this question. His "mechanical problem" was thought to be fixed or at least improved after his latest bullpen session. Despite losing ticks on his once feared heater, he claims to be healthy. I'm not an expert, but if you are losing velocity that isn't a sign of health. Will a DL stint fix this? Maybe. Maybe taking a few weeks to rest and then work back his way back on a rehab assignment will help, but that's a last ditch effort. After last night's start some believe that we may be at that point. What we do know is Scott Kazmir does not give the Rays a good chance of winning every fifth day. Right now it seems that what is wrong with Scott Kazmir is...Scott Kazmir.