Maybe Dan and Troy just really like Ben Zobrist?  Maybe they knew something we didn't and blew the game on purpose so Benzo could hit yet another huge home run in the late innings?  Maybe? Ok, maybe not.

This nonsense has to stop.  The walkoff victory was nice, but it never should have come down to that.

On some nights they're good, but on most nights they're bad.  Tonight was one of the bad nights.  Dan Wheeler and Troy Percival combined to pitch one inning, throwing 33 pitches(14 strikes), giving up three hits, two walks and the go ahead run while striking out no one.

Wheeler entered the game in the 8th inning after an infield single from Ryan Sweeney knocked out Brian Shouse.  Wheeler got the first batter he faced to ground into a fielder's choice.  It would be the only out he recorded.  Jack Hannahan singled to right and moving the tying run to second base.  Orlando Cabrera took the second pitch from Wheeler up the middle for a single, but was thrown out trying to stretch the single into a double to end the inning.  Still, the tying run had scored.  Now it was Troy Percival's turn.

Percy was making his first appearance since closing out Sunday's emotional win over the Indians in grand fashion.  Instead of pitching well as he had last time out, Percival resorted to his normal form.  He got the first batter to pop out to second base.  He would then walk Jack Cust, who would be pinch ran for by Rajai Davis.  Davis would then easily steal second base to put the go ahead run in scoring position.  A walk to the dangerous Matt Holliday brought Jason Giambi to the plate.  Giambi had been 0-6 with 6K's against Percival in his career, so naturally he singled to deep center with an assist to the lights at the Trop that cause B.J. Upton to lose the ball.  The runners would not score, but Maddon would walk to the mound and Percival would walk toward the dugout to a chorus of boo's.  Percival threw 23 pitches in his 0.1 innings of work, and only 9 were strikes.  Yes, he may have gotten squeezed on a couple of pitches, but even if given those it would only bump him up to 11, maybe 12 strikes.

I don't question the effort of these two.  The effort and competitive fire are there.  However, the results are not. 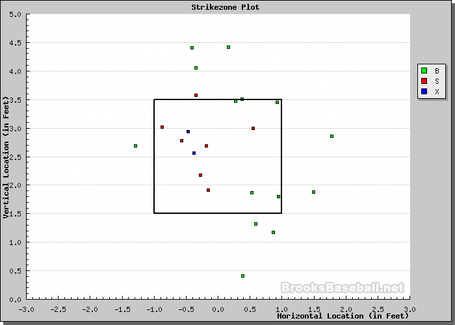