A day after the Rays defeated the Oakland A's in their final at-bat, today's game was over in the middle of the third inning. The Rays defeated the Marlins 15-2 to take game one of the "citrus series" also known as the annual meeting between the Rays and the Marlins nobody really cares about. The Rays jumped to a 2-0 lead off of Jason Barlett's 2-run double, his 10th double of the season. From there the offense just exploded on Ricky Nolasco, who was optioned to the minor leagues after the game.

Dioner Navarro would hit a two run home run in the second inning to put the Rays up 4-0. After a singles by Andy "The DH" Sonnanstine and Carl Crawford, Evan Longoria would drive in his 47th RBI on his 18th double of the season. Carlos Pena would come up next and add to the beating by clubbing a three run homer, his 15th of the year to put the Rays up 8-0. It would only get worst for the Marlins as David Davidson (who?) made his Marlins debut and promptly gave up five runs on four hits, four walks in his lone inning of work. Dioner Navarro had two hits in the inning and Gabe Gross laced a two RBI double off the lefty.  It took Davidson 52 pitches to retire the Rays in the third inning. The silver lining? He struck out the side in the inning. The dark cloud? He was designated for assignment after the game. Whoops

Speaking of Sonnanstine, it was a pretty easy night on the mound. When your team spots you 13 runs before you take the mound in the third inning you can kind of relax and do whatever you want on the mound. He attacked the Marlins hitters, throwing 70 of his 102 pitches for strikes. He featured his cutter 47% of the time and mixed in a slider (25%) and a change up(13%). This is how you throw in a game when you're up double digits: 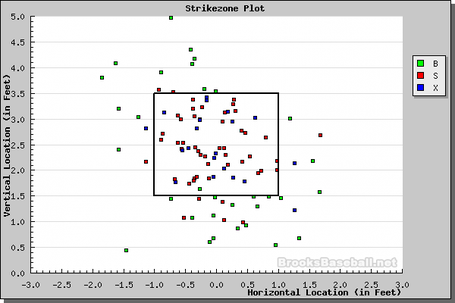