Scott Kazmir's Plunge into the Abyss: A Pitch Analysis

Share All sharing options for: Scott Kazmir's Plunge into the Abyss: A Pitch Analysis

Note: This may seem a bit redundant or late now that Kazmir is on the DL, but instead of just Kazmir-bashing, this article focuses on what Kazmir needs to regain in order to become effective again.

Going into this year, we all had hoped that a renewed usage of his slider would help Kazmir return to his pre-2008 form...

...but that's obviously not been the case.  This year, he's been using his slider at a rate somewhere between his 2006 and 2007 rates, while his fastball usage has dropped back down to a more normal level for him.  The problem this year, though, is that none of these pitches are being effective.

Ouch.  Just ouch.  To summarize the pain encompassed in that chart, Kazmir's two best pitches, his fastball and slider, have dropped off the table (no pun intended) this year, while his changeup has actually been his most effective pitch.  And even though he's using it more often, his slider is being even less effective this year that it was last year.  Fun times, indeed.
Everyone points to Kazmir's slider as his "out pitch" and what makes-or-breaks it for him, but when he posted the lowest FIP of his career in 2006, his slider had an effectiveness of -0.3.  In fact, Kazmir's slider was his best pitch when he was first called up, but has declined in effectiveness every year since then.  Last year's drop off on his slider could be written off as hangover from his injury, but it hasn't bounced back this year; instead, it's gotten worse.  While that's certainly not a good trend at all, it wasn't worrisome as long as Kazmir was able to get outs using his other two pitches.  What really scares me, though, is the precipitous drop-off in Kazmir's fastball's effectiveness.  As his slider has decreased in effectiveness, his fastball has improved in effectiveness every year up until now, allowing Kazmir to remain dominant.  Without his slider, Kazmir is reliant upon that fastball, which didn't turn out too badly last year.  It wasn't the dominant Kazmir of old that we love, but it was enough for him to still be average with flashes of brilliance.  This year, though, his fastball has decreased precipitously in effectiveness, leading to a 5.68 FIP.
So why the sudden drop off in pitch effectiveness?  The slider is tough to delve into since it's been a long deterioration process, plus it may be that Kazmir will never be able to throw it as well as he did before his injury (at least without risking another arm injury).  What about his fastball, though?  If I were a betting man, I'd place money on the fact that it's some sort of injury that has caused an assortment of mechanical issues.  We know Kazmir's velocity is down, which in and of itself contributes to his fastball's effectiveness, but take a look Pitch F/x data on his fastball:
5/31/2008 - vs. CHW, 7 IP, 3 H, 6 SO, 3 BB
Top View 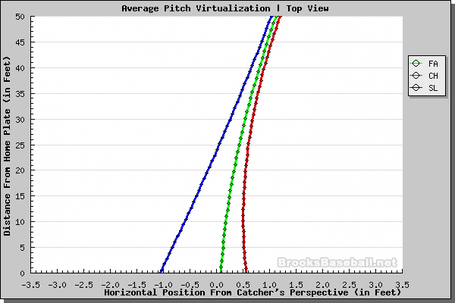 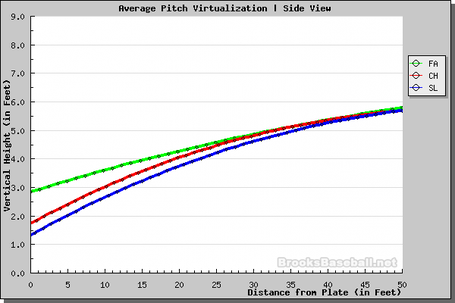 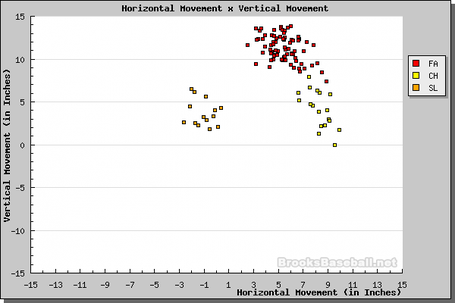 This looks nice.  Good separation between all of his pitches, while all of them have good movement.  In particular, look at how his fastball has a much different trajectory and break than his change up and slider.  And now, last Wednesday's start:

(Note that Pitch F/x data just started distinguishing between two- and four-seam fastballs, so both the yellow and green colors are fastballs.) 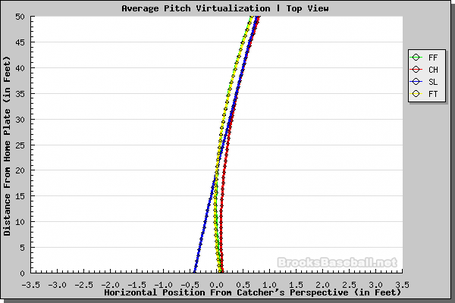 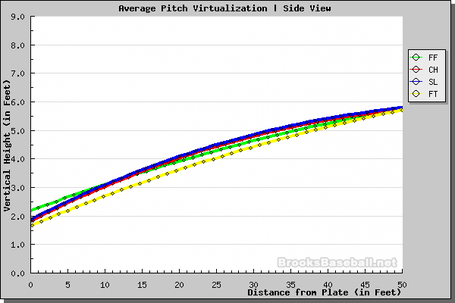 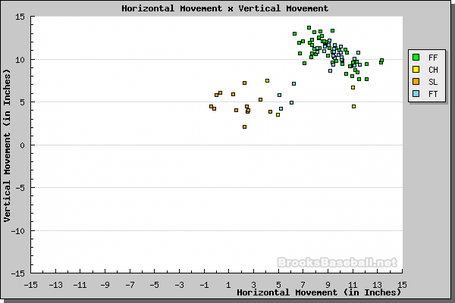 Hmm...not so good.  Notice how all the pitches kinda look the same on these charts?  In particular, Kazmir's fastball has completely changed how it's breaking.  In 2008, it broke about 5.4 inches horizontally and 11.3 inches vertically; in 2009, it's breaking 9.2 inches horizontally and around 10-10.5 inches vertically.  Also, it looks a lot more similar to his slider, although this is partly because his slider isn't breaking as much as it used to.  Combine all of this with a decrease in velocity of 3+ MPH on average and you've got yourself a real problem.

Anyway, no matter how you slice it, things are not going well with Kazmir.  Hopefully a stint on the DL will help straighten him out, but Kazmir is going to need to change his pitching strategy if he wants to become an ace again.  His slider has lost its sexiness, with no sign of returning anytime soon, so Kazmir needs to regain a solid fastball and learn to love his change up.  His change has been his most effective pitch so far this year and was very effective in his banner year of 2006, so Kazmir can still be dominant if he has those two pitches going for him.  Hopefully his stint on the DL will allow him to come out blazing fastballs again and to get his pitches back in order, but I'm afraid that there's more going on here than just an injury.  A hammy injury could result in decreased velocity, but I don't see how that would affect the movement on his pitches, which seems to be a big issue.  Please, let me be wrong...

All data and graphs curtosy of Fangraphs and Brooks Baseball.