When Jason Isringhausen started warming up in the top of the ninth inning, the Rays were leading 4-3. It looked like he was going to be inline for the first true save opportunity after Troy Percival's departure from the team. However, the Rays offense had other ideas and scored six runs in the top of the inning leaving Isringhausen with a low leverage inning of work. Regardless of the situation, it gives us a little more data on Izzy as it looks like he will be Maddon's closer of choice on most nights.

With a big lead, Izzy did not try and get cute with the Marlins hitters. He attacked with his fastball and was pitching to contact. He gave up one hit, hit a batter and struck out one. Overall he threw 24 pitches with 70% (17) of them being four seam fastballs. His velocity was around 91 and he maxed out around 93 mph. This is good news as Izzy was around 89 in his first two appearances. He also got three swinging strikes on his fastball, another good sign. He mixed in three cutters and three curveballs including one that got away from him and got into Wes Helms. You can easily see he just lost the release on this pitch: 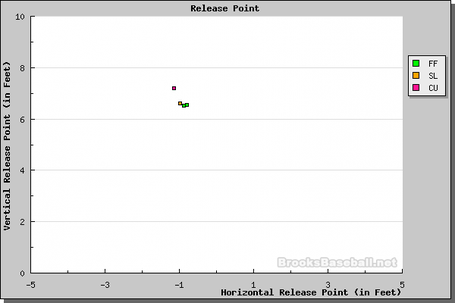 Overall, it was a pretty boring and mostly effective night for the assumed new Rays closer. However, like Percival, work load issues are going to be a problem for Isringhausen. After 24 pitches tonight, I would guess his availability for a day game tomorrow is iffy at best.