Easily the best start of the season for Jeff Niemann. Yes, he threw 67 of 90 pitches for fastballs, but he seemed to have his best control of the pitch in a while. Niemann responded from an absolutely atrocious single strike swinging effort last time out to whiffs on 11% of his pitches tonight. That should certainly help increase his seasonal whiff rates. His fastballs were here, there, and everywhere, not showing as nice of a cluster as the previous time out and Pitchfx failed to register a two-seam fastball, so who knows what's going on there.  Who knows if this is too little too late for Niemann's Rays rotation hopes. With David Price poised to start Monday, and almost certainly a lock to remain in the rotation heading forward, that leaves Niemann battling Andy Sonnanstine and Scott Kazmir's eventual return date.

Some other random thoughts

Reason #22 as to why you should hope for Troy Percival's retirement (and soon): it creates budget room. If Percival retires, the Rays are off the hook for the rest of the payments. Freeing up~2+ million would be a pretty sweet surprise, especially if the Rays have to make a deadline acquisition for a playoff push.

The draft is like three weeks away and we aren't debating who to take in the top 10. Relish this. I'm not saying we'll be picking in the top 10 anytime soon, but the first time is always the most memorable.  Whoever we pick will be the first player since the Rays recorded a win or a loss who was not picked in the top 10 of the first round.

The July 2nd signing period for international amateurs isn't too far away either. Miguel Angel Sano is the hot name. He's a teenage shortstop with comparisons to Gary Sheffield. Every team in the league is interested, but Sano's reported signing bonus would probably engulf the Rays entire signing budget. Then again, maybe his reported signing bonus isn't accurate, we'll see, just don't hold your breath.

If you thought I was alone obsessing over Dale Thayer's mustache, you were mistaking: 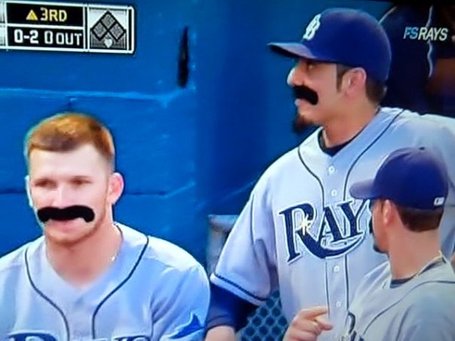