Never ordinary, Joe Nelson faces adversity once again. After a career year in 2008 with the Florida Marlins, Nelson was rewarded by the Rays with a one year contract worth $1.3 million dollars. It was the first time he had earned a guaranteed contract. He also made a major league opening day roster for the first time in his career. Over his first 10 appearances with Tampa Bay, Nelson was one of the best if not the best Rays' reliever. He allowed just five hits and six walks in 11.1 innings. After allowing a few too many home runs in the spring, he had served up just one over those first 10 games to go along with 13 strikeouts.

Then things stopped coming so easily.

In his last 10 appearances, Nelson has not resembled the pitcher he was during the first group of outings. He has just 6.2 innings pitched and has allowed eight earned runs on 16 hits including four home runs. In 2008, he allowed five home runs in 54 innings. He has already reached that total in 2009 in less than 20 innings of work. Over his last 10 games, he has more walks (8) than strikeouts (6) and opponents have a slash line of .471/.558/1.000 against him. Let's just say he hasn't been the most effective reliever.

It looks like Nelson has lost the ability to throw strikes. After throwing 65% of his first 215 pitches for strikes, only 56% of the last 185 pitches have hit the strike zone. What is more concerning, as R.J. pointed out last week, is the lack of velocity he is showing. Never one to be confused with a Grant Balfour type, Nelson has made his career off of a 90mph fastball to go along with his trademark "Vulcan" change up. However, he has lost almost three miles on his fastball which is down around 87 mph. His change up has also lost velocity, going from around 79 mph to 77 in 2008. The movement on both pitches is nearly the same, but the velocity loss has helped hitters get more air on his pitches which has driven up Nelson's fly ball rate 10% while dropping his ground balls around the same number.

The lack of velocity has made Nelson "hittable." The percentage of contact made on his pitches had jumped nearly 7% year over year and is about 5% higher than his career norm. With more contact has come less swings outside of the zone. He is also getting fewer swings and misses. After a nifty swinging strike percentage of 11.6% last year, Nelson is getting whiffs only 8.2% of the time this year.

Since the Rays signed him, I have truly enjoyed watching and hearing about Nelson off the field. The more you hear about his story and get a glimpse of his personality, the more you like him. However, after watching Troy Percival struggle trying to gut out injuries for the better part of a year, you have to wonder if Nelson is trying to do the same. For a person with his medical record the signs are there; the loss of velocity has led to less effective outings and there is no indication that the velocity will return. 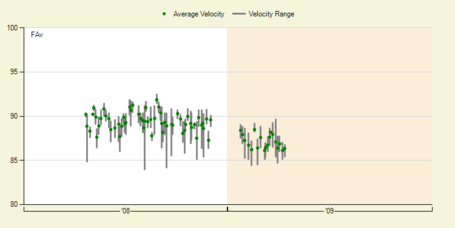 I hate to speculate on injuries and things of that nature, but for a player who is probably one more serious injury away from hanging it up, it's hard not to think that Nelson might be holding on to something that is no longer there. In the meantime, let's hope that it is not an injury and maybe Nelson is just battling through some mechanical issues.

If anybody can beat the odds one more time, it is Joe Nelson.