David Price Wants to Strike Out the World

Share All sharing options for: David Price Wants to Strike Out the World

Few professional debuts have brought such excitement, intrigue, and hype as David Price's in 2008. Leave it to Price to duplicate the emotions for his 2009 debut. Things were immediately shaky, with a walk to leadoff hitter Jamey Carroll and a circus blooper off Grady Sizemore's bat. Price's first out would have to come with two runners in scoring position. Price responded by doing the only thing that made sense, striking out the next three hitters in sequence and ending the inning without allowing a run to cross.

As you can guess, Price's command was a bit off today. Maybe not five walks bad, as he was around the strike zone most of the day (as you can see below) the problem is the Indian hitters simply didn't swing at most of the pitches slightly out of the zone, and the umpire rewarded their patience. This creates an effect where Price has to throw another pitch or two per plate appearance or alter his gameplan and after a while, these pile up. That's not to say he didn't flat out miss on some pitches, clearly he did his fair share of such, but there's a handful or two of pitches that the Indians could've swung at within excusable boundaries. 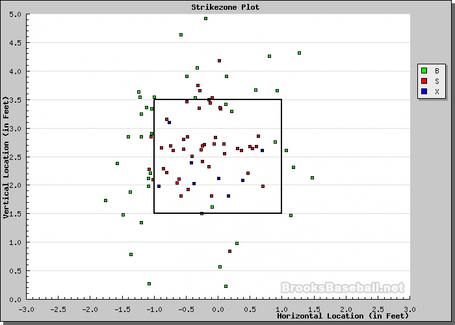 The two things I talked about Saturday were selection and efficiency. Both lacked. Price threw exactly one change but did manage to mix in 18 sliders. Nights like tonight, when his fastball command isn't top notch are exactly why he needs to develop a feel and confidence in his change-up. Even still, Price's fastball is going to be talked about because of the radar gun numbers. He impressively average 96.07 miles per hour with the pitch tonight, and topped out at 98.6. That's with more than 75 fastballs being thrown. The low-tide of Price's fastball velocity seemed to be ~94-95; which is the high-tide for some pitchers.

Remember all those times I've knocked Jeff Niemann's fastball for being flat? Well, Price's fastball breaks an entire inch more than Niemann's, and it's going ~5-6 miles per hour quicker. In short, it's a pretty good pitch. The slider also looks solid, and doesn't break much at all, instead it's all about the deceptiveness in velocity for Price, or at least was tonight. Despite what PitchFx's classification says, it does appear that Price threw a pair of spike curves tonight.  One went 75 MPH, broke ~4 inches in to righties and 8 inches down, and the other went 78 MPH, broke ~3 inches in to righties, and seven inches down. Both resulted in balls. Price did manage to get seven swinging strikes tonight, a bit down from his Durham total. 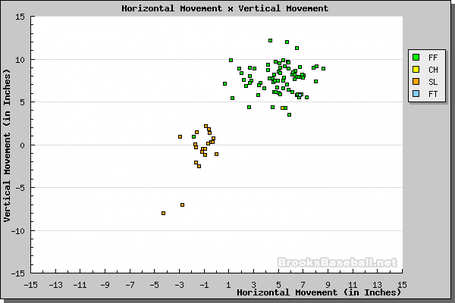 I'm really not sure what that says about Price's confidence in his change-up. The spike seems to be the newest of pitches, and yet he felt comfortable enough to toss a pair of spikes and only one change. Hard to say based on a lone data point if this will be the case heading forward.

Results wise, two runs on a Ryan Garko homerun, five walks, and six strikeouts. Anytime 60% of your outs come via the strikeout, your pitch count is going to run a bit on the high end. Tonight was a little ridiculous though. Price averaged 10 pitches per out. Think about that. A perfect game with that ratio would require 270 pitches and a managerial death sentence.

Hitters sat and recognized fastball/slider well enough to foul the pitch off. When the pitches were even the slightest out of the zone the hitters held off. That's how the Indians drained David Price, and that's how teams have drained Scott Kazmir over the years. Price has to improve his secondary offerings, whether that comes in the form of more change-ups or curves, it doesn't really matter. This is why he opened the year in Durham, and unfortunately, for tonight at the very least, he looked like he still had things to learn.