Is Akinori Iwamura's Career With the Rays Over?

Share All sharing options for: Is Akinori Iwamura's Career With the Rays Over?

I've written about this topic a few times already, but after the events of the past couple of days it seems that this topic is more relevant than ever. Who will be the Rays second basemen in 2010 and is Akinori Iwamura's career with the Rays over? When I first visited this topic back in March, the question of Akinori Iwamura's option was a bit simpler. Even if the Rays didn't plan on keeping Iwamura, it seemed smart to pick up the reasonable option at a minimum of $4.25 million dollars.

Up until Sunday's game, you could argue that Iwamura was playing at his highest level in a Rays uniform. He was hitting .310/.377/.406 with 13 doubles and eight steals. He was also playing above average defense at second base according to the latest UZR ratings.  The Rays could've used him as a nice bargaining chip during the winter meetings with a number of teams looking for quality play at second base.

However, after Iwamura's torn ACL picking up the option is not a slam dunk anymore. Don't get me wrong $4.25 million is still below market value for a player who has been worth 2.5 wins the past two years, but for the Rays $4.25 million is a lot of money especially when second base is looking like a position of strenghth.

Another factor could be possible compensation. None of us are familiar details with Iwamura's contract, but there could be a chance where the Rays "grant free agency" and still have the option of offering arbitration. Should the Rays choose to do this, and Iwamura decline the arbitration, the Rays might get a draft pick if he signs elsewhere. However, Iwamura did not take the path of a regular major league player and this may not apply to him. Without the contract in front of me I can't say if this is the case or not.

Headed into next spring training Iwamura will be 31 and coming off of major knee surgery. Despite the surgery, history says Aki's range was going to take a hit with age. Thanks to fellow Beyond the Boxscore writer Jeff Zimmerman, you can see the trend for decline in second basemen defensively using the UZR metrics. 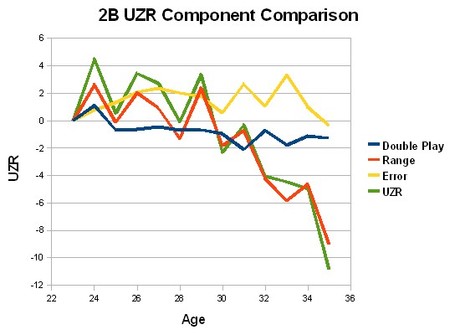 At this point, you can see Iwamura was trending much like the graph. At age 30 his range was peaking while his double play runs were declining. Here is the year over year numbers for both:

Note 2009 is a much smaller sample size and UZR is a measurement tool not a predictive one.

While our 2009 data will remain incomplete, Iwamura was still trending much like Jeff's graph. If you put your stock in the graph you will notice that from age 31 to 32, a second basemen's range falls both substantially and rapidly. I would think this decline would be even more rapid and substantial if the second basemen was coming off of reconstructive knee surgery with ligament damage to his ankle. Could Aki buck the trend? Sure, but it's unlikely given his age and the severity and position of his injury.

If I had to guess, I'd say right now, Iwamura has played his last game with the Rays and that's sad. Iwamura was one of the most likable players in the Franchise's brief history as well as one of the most consistent. Aki was the poster boy of "average", but he did average very well.

Most likely the answer to my question of who will be the Rays second basemen in 2010, will answer itself with the 2009 play of Willy Aybar, Reid Brignac and Ben Zobrist. We've gone over all three as likely candidates and it would seem that all three have equal shots at the position for 2010. At some point sooner or later this issue was going to come to the front burner of the Rays hot stove; all the unfortunate injury did was expedite the process.