On a night where the Rays needed to feel like they were in control of their season, James Shields was just that; in control. Shields has been the hard-luck loser in a couple of games this year, and it looked like he might be headed for a no-decision after a shaky eighth inning from J.P. Howell and his defense, but the bullpen by committee got the job done and the offense had provided enough of a window to work with. Shields would work into the eight inning before ending his night with a line of 7 IP, 7 H, 2 ER, 1 BB, 5 K's. The only mistake he made was a hanging slider to Michael Cuddyer and a few hits to Joe Mauer, but that's pretty normal these days.

Speaking of slider's, Shields had that pitch in full effect tonight. After averaging less than 1% of sliders in his first 10 starts, Shields threw around 15% sliders tonight along with 17% curveballs and 17% changeups. That means Shields had three pitches besides his fastball going which is great. Speaking of fastballs, he was around 90 mph on a combined 47 (4 seam + 2 seam) fastballs.

While he was sat 90 on the fastball, he was around 85 on the slider, 81 on the change up and 75 on the curveball. Four pitches working in unison with control and varying speeds makes for a very nice outing. Shields would throw 99 pitches with 68% of them going for strikes including 8% swinging strikes. As you can see below, Shields had excellent control and command all night. He used all corners of the strike zone and when he missed it was still close. This is the James Shields we expect to see each time out. 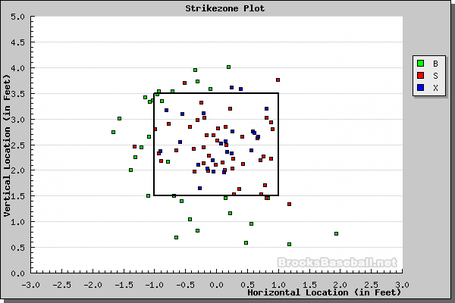 After the game Evan Longoria raved about Shields's performance and what it meant for the team. He stopped the five game losing streak, started the homestand with a win, and saved his bullpen. The Rays should have a full complement of relief pitchers with David Price on the mound tomorrow. Hopefully Price was watching as Shields did not try to strikeout the world and got 14 of his 21 outs via the ground ball or the K. He also started out 18 of the 29 batters he faced with a strike (includes one pitch outs). If Price can do the same we should be in for a treat tomorrow.